The Survivor Diaries series present 10-and-11 year olds in life-threatening situations, who find the courage to persevere and . . . survive! Ages 7-11 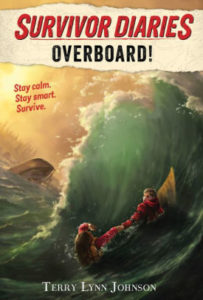 Each book in this series begins with the same question: “Tell me how you survived” . . . the avalanche, the whale attack, the rain forest.  The interrogator is a nameless reporter who will record the story as the reader hears it, in the voice of a kid his or her age.  An unremarkable boy or girl who never expected much of themselves until the challenge was upon them.  This new series, modeled on the popular “I Survived” books, aims at a slightly younger age group.  The premise is similar, except that the protagonist survives a hypothetical rather than historical disaster.

In Overboard!, 11-year-old Travis is on a whale-sighting expedition with his family off the coast of Washington.  A dream sighting of a pod of orcas turns into a nightmare when one of the whales goes rogue and capsizes the boat, spilling Travis and Marina, the captain’s daughter, into the cold waters of the Pacific.  Their first challenge is getting to land before succumbing to hypothermia.  But even after reaching an island with the help of a friendly seal, the kids are in danger of dehydration.  They’ve gained some time, but the clock is running out. 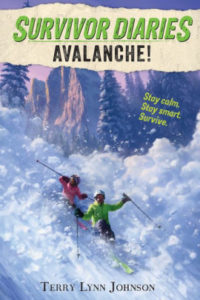 In Avalanche! Ashley and her twin brother Ryan are on a cross-country skiing expedition in Wyoming with their parents, hoping to sight wolverines in their native habitat.  Skiing ahead, the twins happen upon a flat stretch of snow and are halfway across when they hear an ominous rumble.  The wave of snow that follows tumbles them head over heels and sweeps away some valuable equipment.  Ashley, forever in her athletic brother’s shadow, is forced to take the lead when a concussion temporarily robs Ryan of memory and initiative.

Both stories are told economically with realistic characters, problems, and solutions.  Reluctant readers or middle-graders who lag behind their reading level should find them compulsively page-turning.  But the series also shows how, with determination and courage, every child has some power to make decisions and act in a worst-case scenario.  And just in case they are ever actually caught in an avalanche or the open sea, each story ends with facts about how to “Stay calm. Stay smart. Survive.”  Once readers finish the book they may want to play the online game at survivordiaries.com.