It’s that time of year again!  The American Library Association Youth Media Awards will be announced on Monday, Feb. 12, including the coveted Newbery Medal.  As usual, we’ll be watching to see how close our predictions come, but in the weeks to come we’ll discuss our best guesses about who is in the running.  Today it’s Tumble & Blue by Cassie Beasley (who wowed us a few years ago with Circus Mirandus).  Hayley is a fan!  So, Hayley, tell us what the book is about, and what impressed you the most.

Hayley: Tumble & Blue is about two families, cursed for generations, and the chance, one 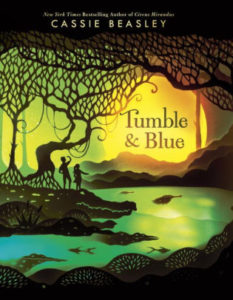 summer, to change fate.  Blue is cursed to lose; his new friend Tumble is well-intentioned hero in training.  Their lives collide when Blue’s father drops the boy off at his grandmother’s for summer, much to Blue’s confusion and disappointment.  Then extended family descends on the house (in a tiny town in Georgia), to see if they can find the mythical alligator that controls the curse.

I love how Beasley weaves a story that is engaging and deep, full of interesting characters and laughter.  Without dragging in hot-button issues or caution-worthy events, she still paints reality, even as she adds supernatural elements–an alligator that controls fate. The world is messed up, people aren’t perfect, but there is hope.

In Circus Mirandus Beasley showed some hints of Christianity.  Tumble & Blue takes a different tack.  What did you notice, Janie?

Janie: That’s a good question.  Now that I think about it, Circus Mirandus could be seen as representing more of a New-Testament understanding, while T&B takes us back to the Garden of Eden.  (The genre, we might mention, is best described as “magical realism,” featuring realistic or slightly exaggerated characters in a realistic setting, with important supernatural elements.)   The ancestral characters who brought about the curse, Almira and Walcott, are like Adam and Eve, except they’re already fallen.  But the choice they make in the primordial swamp dooms their descendants just as our original parents doomed us.  And how would you describe that character they meet in the swamp?

Hayley: I was thinking that the Gator, Munch, makes a lovely Lucifer-type figure: sly, deceptive and proud–he enjoys watching failure.  This is also a fall and redemption type of story, from the original curse to the present.

Beasley’ stories, like those of Ingrid Law or Kate Dicamillo, feature quirky, down-to-earth people. (So do your stories, come to think of it!)  Do her characters work for you?

Janie: Pretty much.  I’ll admit to getting a little bit impatient with characters who come across as deliberately quirky, as though the author is brushing on extra color to an already colorful personality.  Ma Myrtle, the Montgomery family matriarch, is a bit like that, as well as some of the family members.  But Blue and Tumble strike me as relatable and sympathetic, and so does Blue’s grandmother, the long-suffering Granny Eve (I wonder if there’s any significance in that name?).  Tumble’s struggle with guilt and redeeming herself was especially touching.

Hayley: I think Beasley understands how interesting people can be, and she captures that interest in their eccentricities and quirks.  I do wonder, what do you think of Blue’s relationship with his father?  How about his relationship with his grandmother?  I wish there could have been more resolution with his dad, but at the same time, that might have marred the realistic side of the story.

Janie: It’s disappointing that Blue’s dad doesn’t return (spoiler alert!), but it rings true to me.  I think that part was really well done.  It’s fitting that Dad is a race car driver because he’s always speeding away from his real life: family and home.  We don’t ever understand exactly why, but I don’t think we need to.  We understand Blue’s longing for his dad, and sometimes longings are not fulfilled.  I think Granny  Eve is there to make up for it, and I’m glad that Blue has found a place: family, home, and one really good friend.

Hayley: From your standpoint, Janie, what are the book’s literary merits?  I love her voice, the way she captures a very American, southern type setting. I also love the characters and the humor woven through the story.

Janie: I’ll bet Cassie Beasley is a Flannery O’Connor fan, with Georgia roots to boot!  Tumble and Blue reminds me of some of the O’Connor style: exaggerated regional characters, supernatural elements, theological underpinnings.  I’m not as much of a fan of T&B as I am of Circus Mirandus, however.  Parts of it seem a bit overdone, and introducing Munch so early in the story (i. e., the first page) felt a bit pretentious and off-putting.  That said, the story has depth and resonance and any reader should arrive at the last page with real affection for the title characters.

The book is on a lot of Newbery Buzz lists, and I think it’s a contender—not for the gold medal but possibly for silver.  Do you have any ideas about that?

Hayley: Like you, Janie, I’m inclined to think it has potential for silver.  I don’t think it’s edgy enough for gold.  Would I like to see it win gold though?  Absolutely!