Middle grades nonfiction takes a sobering look at the sinking of the Sultana–a worse maritime tragedy even than the Titanic. 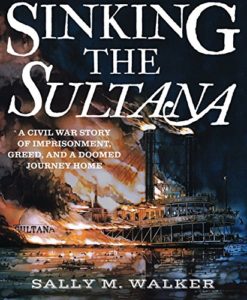 Recommended For: Ages 10 and up

The sinking of the Sultana steamship was the largest maritime disaster in American history–and it happened before the famous Titanic, sinking right in the Mississippi. Among the victims were thousands of soldiers returning home from their service during the Civil War. Steamships didn’t ordinarily carry quite so many people; the Sultana‘s approved numbers were less than 500, yet she had upwards of 2000 on board when she sank. Why? Was it a greedy conspiracy amongst the ship owners and pilots and the government workers tasked with returning the soldiers home? Was it a shoddy boiler repair that was rushed so the captain didn’t lose money?

As with most large-scale disasters, it’s difficult to pinpoint one specific person or cause behind the tragedy. Walker spends time early in her narrative examining the history and construction of steamships, the mass imprisonment and squalid conditions for prisoners of war, and the string of small decisions made hastily or ignorantly at the start of the Sultana‘s journey. She also showcases remarkable heroes in the aftermath of the disaster: Confederate soldiers pulling Union soldiers from the water; people who provided shelter, clothing, food, and even money to the survivors; children who helped right along their parents. Walker also tries to tease apart the evidence that surfaced concerning potential guilty parties and why there was so little done about the tragedy. Primary source materials are plentiful and include photos, reprints of newspapers and prints, excerpts from diaries and letters. A glossary and bibliography round out the book. The narrative is a bit slow during the first third of the book, and the characters run together. But for students of Civil War history or those who enjoy historical disaster narratives, this is an interesting read. It’s worth asking young readers who they think is at fault for the crisis and if fault could ever be determined. Who are the real heroes in this story and why?

Cautions: graphic images (one especially striking photograph of an emaciated prisoner as well as those of the sinking ship)

Sally Walker is also the author of one of our favorite nonfiction picture books: Finding Winnie.