Dame Agatha: Murder on the Orient Express and And Then There Were None

A Scene of Terror

Sitting alone in the dark house, I gripped the book tightly, desperate to finish and petrified at the same time. Was that a noise I just heard? Should I call my mom? When would the parents of the sleeping child down the hall return?

I was twelve and covering my weekly babysitting gig across the street. And I had just discovered Agatha Christie for the first time: Ten Little Indians (since re-named And Then There Were None). Already a mystery geek, I’d read more than my fair share of Nancy Drew, Trixie Belden, and the Hardy Boys. The Westing Game … amazing. And now?! An author who wrote scads of mysteries? Too good to be true!

I devoured Agatha Christie’s mysteries when I was a young teen. 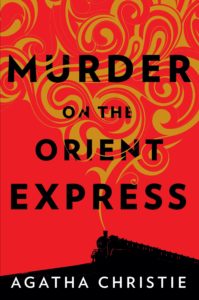 Recently, I sat down to re-read some of those early favorites: Murder on the Orient Express because the movie is coming out!! And And Then There Were None. Would I remember “who done it”? Would I be just as creeped out, frantically reading and turning pages until the wee hours of the night? The answer to both of those questions is a resounding yes.

But I noticed something new: the two books are very different in terms of the cautions we affix to books here at Redeemed Reader. And Then There Were None has far more profanity and more sexual insinuation. Murder on the Orient Express is just as much a psychological book, but the entire feel of it is different. Is that merely because one is a Hercule Poirot novel and the other not?

Honestly, I’m not sure. I’m not an expert on Agatha Christie. But I do know that I remembered none of the language issues, none of the sexual insinuations, or any of the other things I might now “caution” against. And that brings me to my point:

Kids are great at self-censoring, particularly if they are speedy readers (and mysteries, in particular, invite speedy reading). Kids often gloss over language issues, and sexual insinuation they don’t recognize goes right over their heads. This doesn’t mean that parents and teachers don’t need to set standards for moral issues in books, but it does mean that we probably don’t need to stress about stray lines here and there quite as much.

Mysteries Are Worth Reading!

And my second point: mysteries are totally legit! Some people scoff at mysteries as “just” leisure reading, but there is more than meets the eye in this popular genre. Similar to their contributions to fantasy literature, the Brits have the market cornered. Some of the best mystery writers are British, and their works are complex, sophisticated, and demand quite a bit of thought from the reader. These are no mere trifles; rather, these mysteries are worth reading and worth reading closely. From hooking reluctant readers to challenging seasoned readers, mysteries can be found for every reading level. Some of my personal favorites as an adult (most are British):

Let me also direct you to some excellent resources on Murder on the Orient Express in particular and mysteries in general:

Who are YOUR favorite mystery authors? Or, if you share some of my favorites, what is your favorite title? And be sure to check back Wednesday for our Mystery Booklist!