Slider uses the world of competitive eating as a context for exploring the agony and ecstasy of family relationships. 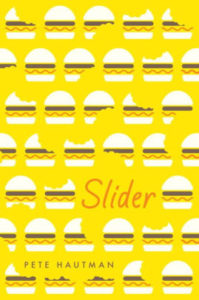 Everybody is good at something, and David Alan Miller is a competitive eater.  He knows all about it: all the winners of the annual Nathan’s Hot Dog contest at Coney Island, all the legends, lots of tricks and tips.  If stuffing yourself until your eyes cross doesn’t sound admirable, give the kid a break: an average guy with an average name in average Vacaville, Iowa—and a middle kid to boot.  It’s like “being the beef in a SuperSlider [burger]; you’re just there to hold the bun together.”  One side of the bun is his sister Bridgette, a star student on full scholarship. The other is little brother Mal, whom Mom refuses to label autistic, even though Mal doesn’t talk and he freaks out over anything outside his routine.

David has his best-buds and his eating ambitions, so things are okay until the day he spots an artifact online: the last half hot dog that champion chow-downer Jooky Garafalo couldn’t finish at Coney Island.  It’s famous!  And the opening bid is so low David decides he can sneak his mom’s credit card and bid as high as $20.  Only there’s a little mistake with the zeroes and soon he’s in three zero’s worth of trouble.  The only way he can think to win the money back is to put his specialty to use at the Iowa State Fair pizza-eating contest.

There’s a bit of a gag factor here—more about competitive eating than you really want to know—but it’s not really about that.  Bridgette’s materialist boyfriend Derek assures David that we’re all basically “tubes” with a hole at each end, but our protagonist instinctively knows better than that.  He also instinctively knows (as does the reader) that Derek is a jerk.  We’re more than the sum of our digestive systems; and this story is about more than how much pizza he can stuff down his gullet.  It’s really about family and caring about each other while putting up with each other.  Because you have to, but really because more than that.  Mal is the wild card, “invincible, immune, blameless,” who stretches this family to exhaustion and to triumph.  There’s a huge payoff at the end that will make you cheer.  Or cry.  Life is like that; it teaches you not to run from your challenges but sometimes to literally embrace them.  The reward can be awesome, and Slider is a rewarding read.