The Many Worlds of Albie Bright by Christopher Edge

The Many Worlds of Albie Bright by Christopher Edge.  Delacorte, 2017, 162 pages. 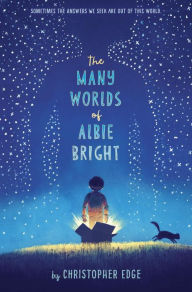 Albert Steven Bright, named for his parents’ favorite scientists (Einstein and Hawking), has just suffered the most grievous loss an 11-year-old boy can face: the death of his mom.  His father, a famous TV science guy, has buried his grief in work and is not accessible.  Ironically, though, it’s through one of Dad’s books that Albie hatches an ambitious scheme.  His parents were both involved in cutting-edge particle physics with a sideline speculation into multiverse theory.  If the theory is correct, Albie may get to travel to a universe where Mom is still alive.  Plausibility stretches gossamer-thin here, but Albie uses the the mildly-radioactive properties of a banana to make it sound scientific:

I grab the banana from my bed and put it next to the laptop, digital USB Geiger counter, and cardboard box on the floor.  If there’s a ten percent chance that the banana goes radioactive, then according to Dad’s book, this should split the universe in two . . . [in one universe] the banana will spit out a radioactive gamma ray.  If I hook up the Geiger counter to Mom’s quantum computer, then maybe it can find a shortcut to the universe where this happens.  I decide to call this the Quantum Banana Theory.

You don’t have to understand the science to get involved in the story, which also raises some metaphysical questions.  On the first page, Albie’s dad and grandfather disagree about funeral arrangements: “Dad said he wanted a humanist funeral without any ‘religious mumbo jumbo,’ but Granddad Joe wasn’t having this.  ‘She’s not a humanist,’ he said, almost spitting out tea when Dad tried to explain.  ‘She’s my daughter.’” Albie’s goal of reaching an alternative universe is the quantum equivalent of life after death.  Though not as rigorously pursued as the science, the question is eventually answered with what sounds like religious mumbo jumbo.  But Albie is a likeable and sympathetic narrator with a sense of humor, and his “alternate” life-stories could stimulate interesting discussions.  Readers should know, however, that there’s no scientific evidence for multiverse theory.