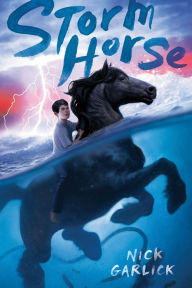 Storm Horse pits a boy and a horse against a greedy land developer in the modern-day Netherlands.

A tiny, remote island off the coast of the Netherlands is the last place Flip thought he would ever end up.  But his father’s death brought his father’s only living relative to Amsterdam to settle affairs and provide a home for the 12-year-old. There was no love lost between Flip’s father and uncle—his father was a carefree lazy sort who followed the bright lights to the big city and ended up as a petty thief.  Flip’s mother couldn’t stand it; she finally walked out with the intention of getting a job and coming back for the boy when she could support him.  But it’s been three years since Flip has heard from her, and now he’s headed out to Mossum Island to earn his keep on his dour Uncle’s farm.  At least Aunt Elly is nice, and so is his cute cousin Renske, and the animals–especially the horse, Leila.  When a violent storm blows in from the north, Flip spots another horse struggling in the surf: the sole survivor of a shipwreck.  When Flip rescues him and names him Storm, it appears he has a horse of his own.  But the Mesman brothers won’t stop picking on him, and their fat-cat entrepreneur dad has his eye on Uncle Andries’ farm, which he would love to turn into a tourist resort.

Though predictable with a few too many handy coincidences, this is a sturdy tale harking back to the mid-20th century (I’m guessing it’s set in the 1960s).  Dependable themes like courage and resourcefulness, not to mention kindness to animals, are easy for middle-grade readers to relate to, and both boys and girls will wish they could pull a horse like Storm out of the water.

P.S. If you’re in the market for classic horse stories, be sure to check our Kentucky Derby list!