Blooming at the Texas Sunrise Motel by Kimberly Willis Holt

In this likeable middle-grade novel, a grieving 13-year-old builds a new life in a new place with extended family. 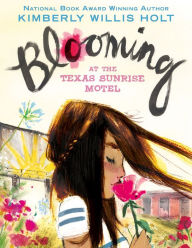 Tragedy strikes in the first chapter, when Stevie Grace, age 13, loses both parents to a drunk driver.  Within days, the family “farm”—a few sundrenched acres in New Mexico– goes up for sale and Stevie is on a bus headed for Texas and her maternal grandfather, her only known living relative.  This is a pretty standard set-up: sudden orphan sent to live with a cranky old person she barely knows because her parents weren’t on speaking terms with said elderly crank.  The grandpa, Winston Himmel, owns a small motel (the Texas Sunrise), but it’s as rundown as his personality and heart—if he has one.  Soon enough we learn that he does, and he and Stevie will warm to each other, and the habitués of the Texas Sunrise are quirky but endearing, and the handyman’s son is very cute.

Standard, as I said, but the author tells it with such verve and confidence it seems new.  And a bit retro as well, since the story doesn’t get tangled up with controversial “issues”: even the cover design harks back a few decades.  Flowers and herbs are the thematic metaphor, since gardening runs in Stevie’s blood, and she’ll discover its roots in her extended family.  Family matters; those ties to uncles, aunts, cousins, and grandparents can’t be duplicated elsewhere, as Stevie’s hippie-style parents were just beginning to realize before it was too late for them.  But it’s not too late for her. The plot may be a bit slack (What about that drunk driver?) but the values are firm.

Cautions: mild sensuality (Stevie shares one real kiss; also learns she was conceived out of wedlock, though her parents later married)