As part of our “Beauty and the Beast” focus this month, our staff got together and brainstormed books and other resources (such as movies) that would fit that theme.   Two titles came up immediately: Wonder, a novel by R. J. Palacio, and Ugly: a Memoir by Robert Hoge (follow the links for our reviews).  Both tell a similar story about a boy born with a hideously deformed face.  How are they similar otherwise, and what do they say about physical appearances and the inner person?

Janie: Wonder was published in 2012 and became an instant classic with its absorbing story, 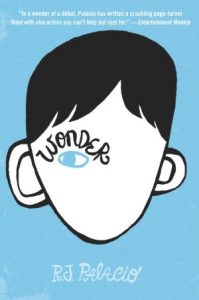 relatable characters, and uplifting theme (a movie version, originally scheduled for next month, will open in November).  Protagonist August (Auggie) Pullman is a boy with severe physical birth defects, most notably his face.  After an infancy and early childhood of endless surgeries and recoveries, his parents decide he’s ready, at age ten, to make the transition from homeschool to private school.  The narrative covers the setbacks and triumphs of fifth grade.  Ugly: a Memoir, is the author’s own story.  Born with a huge tumor in the middle of his face, he was such a shock to his mother she at first did not want to take him home.  His legs were also severely deformed, and would be a much greater physical challenge as he grew.  Yet if twisted legs were the only problem, his parents would almost certainly have accepted the challenge without question.  It was his face that made them pause–or really just his mother.  Thankfully, she changed her mind, and Robert was able to grow up with a loving family (like Auggie) and lead a successful life in spite of his looks.  He wrote his memoir as a mature adult, while we leave Augie ready to go into sixth grade, so of course the perspective is different.  Also, because he’s writing from his own memories we don’t get to explore other points of view, as we do in Wonder.

Betsy, you read both books, as I did: which affected you more, and why?

Betsy:  Hmm, Janie, that’s a hard question. I read Wonder when it first came out and thoroughly enjoyed it. My first thought was that it’s a near perfect fifth grade book (the same grade as Auggie). It touches on so many issues that kids on the threshold of middle school are wrestling with, particularly when it comes to identity and treating others kindly. I really enjoyed the various perspectives used in the book, too, particularly that of Auggie’s sister. It’s rare that we see what a sibling of a special needs child might be thinking and feeling, and her perspective was refreshingly honest. I read Ugly this past fall, and I was struck by how utterly relatable Robert’s voice is throughout the book. Even though I have not suffered like he has, I could remember feeling some very similar feelings growing up. Ugly has stayed with me longer in terms of specific moments in the book and the general “true story” effect. Additionally, Robert is making some pretty big decisions about his own future by the end of the book, and there’s a future orientation and hope that is more satisfying than the ending of Wonder. What about you, Janie? Which book affected you more? What do you think are the biggest differences in how these two books explore the issue of physical deformity?

Janie: One obvious difference is that the author of Wonder did not experience  the deformity herself.  That means she is free to explore other points of view besides Auggie’s, and I thought it was brilliant that Auggie (whose voice we hear for the first several chapters), never describes exactly how he looks.  That job is left to his sister.  Thus we get to know Auggie as a person before we “see” him.  (That also happens in the movie Penelope: the leading man gets to know and like the leading lady before he sees her, and then has a lot of readjusting to do.)  Since Wonder is a novel, it’s all about character relationships and themes.  The opens up a wider focus than Ugly, which has the natural limitations of nonfiction.  However, I agree with you that Ugly has a more powerful impact, for two reasons.  First, it’s real.  Robert Hoge’s recollections and feelings are immediate and gripping.  I was especially moved by the chapter in which he describes his family voting on whether to bring him home from the hospital—essentially, whether to accept him as part of the family.  Every one of his siblings voted yes, and his father was for it from the beginning.  His mother—the last person you would think should hold back—was the only person who felt the least bit uncertain.  Yet, in the way he writes of this, without bitterness, we understand her (and she made up for lost time!).  Wonder, written about fifth-graders with that age in mind, ends up being just a tad moralistic and feel-goodish to me (though the target audience certainly needs some moralism and empathy at this age!).  Ugly is just as feel-goodish in its way, but we get there more  “authentically.”  And the decision Robert made at the age of fourteen knocked me out!  One thing I’m wondering: why did the publisher decide to use drawings to illustrate Ugly rather than photographs (which anyone can look up online).  Any guesses? 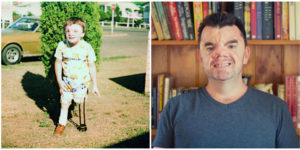 Betsy: Janie, that is a fascinating question and one, I’ll confess, that stumps me. I do think Robert’s voice becomes a sort of “everyman” voice without the pictures. That is, we know his story is true and that these events happened, but it’s easy enough to put yourself in his shoes. Perhaps with the pictures themselves, we would distance ourselves more from his particular experience? Are we so shallow as humans that we’d think he either didn’t look bad enough to justify his feelings or we’d be turned off by his appearance? What do you think?

Janie: I think you’re on to something there.  If a book has illustrations, I tend to flip through for a look at them, and maybe the design team figured most kids would do the same.  Photographs are shocking: when readers finally encounter Robert as he looks now (on the back flap), they’re prepared, but he’s ugly by anyone’s standards.  Line drawings soften the effect, and perhaps work like something like the first few chapters of Wonder, where we get to know Auggie before we see him.  On the first page of his memoir, Robert writes that our faces are our “admission tickets” into the human family, the first impression most of us have of each other.  An ugly face, which the bearer cannot help, shouldn’t make a difference in how the rest of us respond, but it does.  It’s something we have to get past, which sometimes takes effort and other times just takes familiarity.  Robert shared in an online interview that he dreaded the moment his oldest daughter would react against his face, but that moment never came.  She knew him and loved him as Daddy before she could make comparisons; that’s just what Daddy looks like!  In the church where I grew up, there was a man whose face had been damaged by a land mine in the Korean War; I noticed it, but his wife and daughters didn’t seem to.  His wife, especially, looked at him as though he were the handsomest man on earth, and I came to see him a little bit through her eyes.

Both these books cause us to re-think our own immediate reactions to appearance: “Man looks on the outside, but the Lord looks upon the heart” (I Sam. 16:7).

Redeemed Reader is not affiliated with or endorsing the 2017 Disney live action Beauty and the Beast film. Rather, we are taking this opportunity to examine the traditional fairy tale and its connections to biblical truth and contemporary literature.
Please follow and like us: