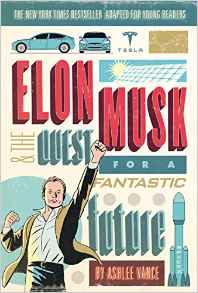 If there’s a candidate for “Thomas Edison of the 21st century,” he would be it.  Born and raised in South Africa, he headed for North America as soon as possible.  Not surprisingly, he ended up in Silicon Valley, where the future was happening.  His first entrepreneurial efforts were in computing, and very early he established a pattern: vision, promising start, setbacks or failure, success.  His first Intel startups, after a rough launch, made him a millionaire when he sold them (one of them became PayPal).  Then the big thinking began: not about the increasingly micro-world of computing, but about powering communities and traveling around the world and into space.  Tesla Inc. and SpaceX both encountered massive problems, cost overruns, and expensive delays that brought them to the brink of bankruptcy.  But in both cases, Musk doubled down, worked out the details and eventually broke through to success (update: Tesla hasn’t done so well lately but maybe in time we’ll have a long-range, horsepower-equivalent electric vehicle).

Elon Musk is not the genius: a crew of first-rate engineers, programmers and logicians make it happen.  But he has the vision and the business sense to hang in long enough to produce a practical electric car and a rocket capable to going to the moon—and eventually to Mars. This biography, a young-reader edition of the author’s original book, gets a bit technical for this non-tekkie reviewer, and it appropriately soft-pedals its subject’s marital difficulties (second divorce in the works).  I also appreciate how the author handles quoted vulgarity, to the point of using ellipses and bracketed euphemisms.  As such, the language doesn’t detract.  Musk has his personal faults, and could best be described as an agnostic, but his story is a testimony to the power of human creativity and free (or mostly-free) enterprise.

Cautions: Language (a few instances of mild profanity, such as “hell.”)