Henry discovers 100 cupboards that lead to other worlds in this complex middle grades fantasy series that mirrors the creation-fall-redemption narrative framework of Scripture.

Recommended For: Ages 10 and up (and adventurous 9 year olds) who love complex fantasy; for fantasy-loving families, this works well as a read aloud for ages 10 and up

In this first book of the trilogy, we meet Henry York, nephew to Frank Willis and his cheery wife, Dottie, and cousin to Henrietta, Penelope, and Anastasia. Henry is living with them for the summer, and they happen to live, ironically enough, in Henry, Kansas (Henry is from back East). During the summer, Henry learns to play baseball. He also learns that there are 99 hidden cupboard doors in his attic room, how to get into the formerly locked and impenetrable door to his deceased grandfather’s room, and how to travel to new worlds. And then Henry and his cousin let loose a witch from another world. And Henry discovers that he himself might be from another world…. 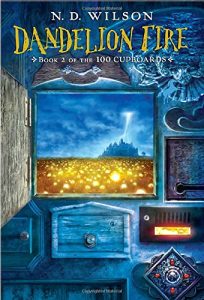 In book two of the 100 Cupboards Trilogy, Henry, KS, forms a distant memory as Henry, Henrietta, and the rest of their family embark on otherworldly adventures. Only one of these persons actually seeks out his or her adventure. The rest have their “greatness thrust upon them” as it were.

In book 3, well, Wilson knows how to end a series with a bang. Seriously.

The 100 Cupboards Series is finely crafted with imaginative new worlds, complex plotting, and terrific character development. Wilson depicts loving–yet realistic–families complete with sibling/cousin bickering and married couples who orbit around each other without seeming cheesy. Yet Wilson also portrays the grand narrative thread of Scripture itself: creation (Henry, KS, at the beginning), a terrific fall (the release of the witch Nimiane* at the unwitting hand of Henry is a remarkable parallel to Adam’s original sin, isn’t it, in which sin entered our world and corrupted it fully and utterly), and the hope of redemption–that there will be a way to fix this mess with Nimiane, but it will involve sacrifice. If 100 Cupboards starts the narrative thread in motion with Creation and the Fall, Dandelion Fire shows the scope of the fall. Here we see evil, and the death it creates as it spreads its tentacles. And here we see the beginnings of redemption: Heroes rise up. People stand in the gap. And brothers come together, families are reunited, and hope springs anew. All because of a little dandelion. 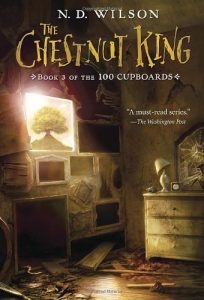 One of the reasons fantasy can be so enjoyable is that it helps us picture the reality lurking outside our temporal, earth-bound viewpoints. The Story of the Bible is grand, over-arching, and firmly grounded in a spiritual reality that the earth merely participates in. Battles are being waged that we can’t see. Truly wicked forces are at work–and the heroes that rise up to fight for the side of good aren’t always the strong, beautiful, or brave folks. But they are fighting for what they believe in because they have been called to do so.

This is what The Chestnut King, book 3, communicates so well: epic battle, incredibly wicked foes, ordinary heroes, sacrifice, reunion–just what the final book in an epic fantasy trilogy should be. This is also how Revelation depicts some of the final story of the Bible as Christ returns and the bride of Christ is united with him.