An engaging account of notable figures from the ancient church to the end of the Middle Ages. 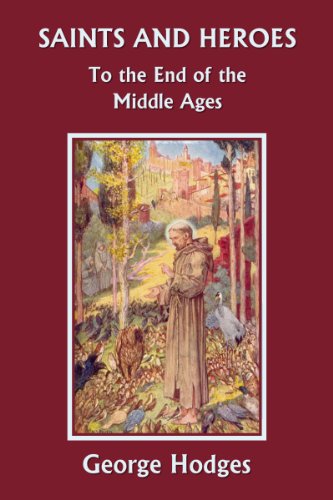 Saints and Heroes to the End of the Middle Ages by George Hodges. Yesterday’s Classics, 2006 (Originally published 1911), 188 pages.

Recommended For: Read aloud for ages 10 and up: independant reading for ages 12 and up

Written in 1911, Saints and Heroes provides an anthology of the lives of twenty famous Christians in church history.  Beginning with Cyprian, 200-258, Hodges traces the growth of the early church as he recounts the lives of outstanding early Christians, both well-known such as Jerome and Benedict,  and not so well known —Hildebrand and Bernard.

While Hodges focuses on one person in each chapter, he makes connections with previous characters.  “Among the young men who listened with interest to the eloquence of Ambrose in the Cathedral in Milan was Augustine.”  Hodges also ties his characters to the broader world.  Readers come to understand the impact of the Roman Empire, the devastation of its fall —the role of Christianity in preserving culture and spreading the gospel, and the rising conflict in the Middle Ages between the power of church and state.

Character studies are sprinkled with vignettes —some more engaging than others.  Hodges points out both strengths and flaws, showing the ramifications, both good and ill, of each man’s actions.  Hodges’ occasional allusion to other events or characters can be confusing, but as readers become familiar with his storytelling style, they can connect the main narrative points.

In recounting miraculous happenings, Hodges states as facts some details that may be better characterized as legend.  Sometimes his evaluations are suspect as well.  For example, in his treatment of some characters, such as Bernard (1091-1153), his simple statement that Bernard was “absolutely unselfish,” should cause readers to pause since only one person in history has been perfectly, absolutely unselfish.  Also worthy of note is his observation that Augustine’s theology was “partly true and partly untrue . . .”

Hodges, an Episcopalian minister, occasionally touches on theology, but his lack of comment or way of explaining certain doctrines can be unsatisfactory or even startling.  In describing Augustine’s response to Pelagius, Hodges writes, “Man is, by nature, depraved totally, and comes into the world in sin, the child of the devil; so that even a helpless infant, dying before he has done either right or wrong, must go into everlasting punishment for the sin which is born in him unless he has been born again in baptism.”  There is much food for discussion here, and a reader would be helped by pulling out Marty Machowski’s The Ology, to better explore this difficult topic.

Suitable as a read-aloud, or for middle-grade readers, Saints and Heroes still provides a comprehensive introduction to church history, providing a springboard for learning more about heroes of the faith and faith itself.

NOTE: This book would be difficult to find in most public libraries, but the Amazon Kindle version is only $1.99.

Hodges says we have “recently outgrown” Jerome’s method of argument —name calling, accusations of dishonesty, etc.—  Is this true?

According to Hodges, Augustine “contributed a system of theology, partly true and partly untrue, which for good or evil, governed the minds of men during the succeeding centuries.”  What do you think of this statement?  Is it supported?

Hodges was a Christian.  Does that mean everything he wrote is true?  What are some ways we can read discerningly, even with Christian authors?