A few language cautions aside, this medieval fantasy tale illustrates some profound truths about finding oneself in the journey. 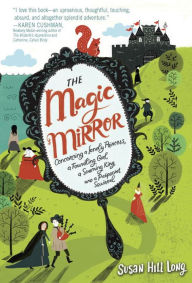 The Magic Mirror: Concerning a Lonely Princess, a Foundling Girl, a Scheming King, and a Pickpocket Squirrel by Susan Hill Long.  Knopf, 2016, 308 pages

The mirror reflects the truth, inside and out: Lux Vera.  Certain images found therein will launch the title characters (except maybe the squirrel) on separate quests that meander through unexpected places and converge in surprising ways.  Maggie is the 15-year-old foundling, lame from a barely remembered accident in toddlerhood.  A proposed marriage to the local hunchback, arranged by her foster mother, Minka, convinces Meg that an unknown future would be better than the known.  After an itinerant peddler trades the magic mirror for her crutch, she’s sure of it.  What she sees in it inspires a quest—who is the wild-eyed man who consistently there?  Bertram, a charming young street performer, may not have the answers, but he and his cousin Henry, a repentant friar, are good company for the journey to Knightsbridge, where waits the Lonely Princess.

The story takes place in a recognizably English medieval countryside that, except for a few magic elements and a fictitious king, could almost be historical.  The social strata, the mild bawdiness mingled with genuine piety, remind me of a PG-rated Canterbury Tales.  Sturdy characters create their own space in the story and some develop in unexpected ways.  Some of the unravelings at the end may seem a bit tacked on or tucked in, but the author lets us reach a few conclusions ourselves.  And though we have our subtle schemes, God’s are subtler still.  As the peddler says,

“Do not ask what is my true love’s face, or show me the riches I long to claim.  Ask instead, ‘Who am I and what am I all about?’  Time and tide you’ll need, to seek a true reflection—and never magic at all.”

Like Minka, whose fear of bad luck barricaded her in her own house before crisis drove her out, we’re glad we took the journey.

Cover image from Barnes and Noble