Originally published a couple years ago, this post explores one fantasy series for middle grade readers.

. . . when you love it so much that as soon as you finish it, you read it aloud to your younger siblings, and they love it.

You know it is exceptionally good . . .

. . . when your mother keeps hearing about it, decides to read it for herself, and proceeds to stay up late each night reading until she has finished it and thoroughly enjoyed it for herself.

You know you live in a family of book lovers . . .

. . . when your younger brother promptly starts to re-read said book again, and funny passages are continually quoted in family banter.

Which book, you may ask?

Welcome to the world of Septimus Heap. It takes place in Europe in an alternative medieval-esque 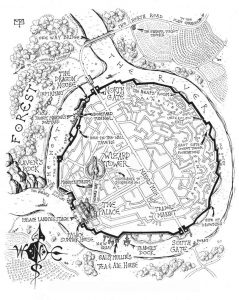 fantasy world. Life revolves around the Castle, the Forest, the River, and the Marram Marshes, not to mention the Port. The simplistic sounding place names are deceiving, for within the pages of each book are a mass of Dickensian characters with names and personalities that will stick in your head long after you lay down the book. Take the Heap family who are characterized by their tousled, straw-colored hair. Take Marcia Overstrand, the rather bossy ExtraOrdinary Wizard with dark curly hair and pointy purple python shoes.

The first book in the series, Magyk, finds Marcia Overstrand on a collision course with the Heap family. The reason? Because Jenna, whom the Heaps have been raising as their daughter, is actually the Castle’s princess. The secret is out:

All of them, even Sarah and Silas, shared the same curly straw-colored hair, and of course they all had the piercing green Wizard eyes. And in the middle of the Heaps sat the Princess, with her straight black hair and deep violet eyes. Marcia groaned to herself. All babies looked the same to Marcia, and it had never occurred to her how very different the Princess would look from the Heaps when she grew older.

Different Jenna is, and once she is discovered, the evil usurpers of the castle are intent on eliminating the last member of the royal family. This discovery launches Jenna, Heap family, Marcia Overstrand, and a host of other minor and not-so-minor characters into one long, interesting, and rather rambling adventure. As the series continues, one adventure leads into another and there is nary a dull moment though many a funny one.

This story and series, revolving as the title of the first book indicates, around magyk does involve quite a bit of it: spells, curses, potions, crystal balls, prophecies and the like though interesting enough, no broomsticks. In this world, the term “wizard” describes either a man or a woman (like Marcia) who practice normal, orthodox magic. Then there are the Wenlock Witches and The Keeper of the Marram Marshes: blue-eyed witches who are slightly unorthodox and more attuned with nature. In a third, and definitely evil category, are the Necromancer and darke wizards and witches who practice black magic. Oh, and add a host of ghosts -some former wizards- who range from friendly and helpful to downright wicked. 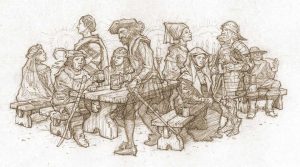 Sound complicated? It is, but there is an order and sense to the magic. Everything has a reason and a place and there is an unspoken order that rules over the magyk. Those dabbling in the “darke” get drawn into the darke. The darke is a sinister, powerful, corrupting force, and not to be taken lightly. At the same time, the darke of Septimus Heap, is a dark that could be handled by a middle-grade reader or an elementary age listener. This is far below Harry Potter when it comes to darkness levels, and far below the Inkworld trilogy by Cornelia Funke, too.

At the same time, as a caution for a sensitive reader, Septimus Heap speaks of “magical” things that do find their way into our world. Marcia, a good wizard, has a Ouija board in her apartment and while mentioned in passing, I feel like it might be worthy of discussion. Ouija boards and crystal balls are still around and are not something to be taken lightly because we, just like Septimus Heap, have darkness in this world. One more caution is that, later in the series, one couple appears to be living together before they are married. Nothing is overtly said, but it is obvious to a discerning reader that Lucy and Simon are living in the same place. I wish this detail were not a factor, but because of it, I am going to give “moral value” a lower rating than the overall series merits. (This second issue can be avoided if you read the first book as a stand-alone story.)

If you are comfortable with and aware of these cautions, I do heartily recommend this series. The narrator’s voice is one of my favorite things about Septimus Heap. Like J. R. R. Tolkien in the Hobbit, it is a comfortable voice that plays down the scary parts and adds humor to many details. 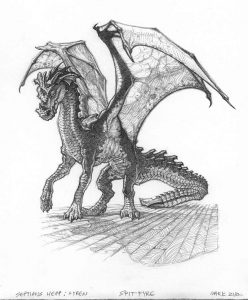 He was not used to the smell of dragon breath, which is best described as a combination of the stench of burning rubber and the stink of old socks, with overtones of a hamster cage in dire need of a cleaning.

How fun is that? This indeed is an entertaining series that is sure to be enjoyed by the entire family.