Tempest in a Mixing Bowl

As a book reviewer, I have stars in my eyes. That is, I watch for stars when scanning book review journals, because they are an indicator of what someone finds excellent. Often, what others value is not what I would value, but if a book collects a lot of stars (six is the absolute gold standard for children’s books, one from each of the six major review journals) it generally means one of two things: 1) exceptionally high artistic value, or 2) exceptionally high social value. The latter is the case with certain children’s books that address the latest hot social issue or a continuing social issue. 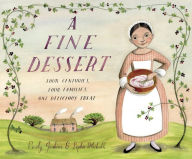 My focus is on fiction and non-fiction for middle graders (ages 10-14), though I’ll spare some time for YA. But occasionally I’m intrigued enough by the premise of a picture book to request it from my library. This was the case with A Fine Dessert: Four Families, Four Centuries, One Delicious Treat by Emily Jenkins, illustrated by Sophie Blackall. The author surveys history from the kitchen, as she follows the origin and development of the cobbler-like treat known as blackberry fool. The illustrations are gentle and charming, with lots of period detail showing how families from the 1700s to the present century lived, dressed, and ate. But here’s the messy part: one of the families is headed by a South Carolina plantation owner, and the work of gathering berries, mixing the batter, firing up the oven, and whipping cream to go on top is done by a slave mother and daughter. They seem reasonably content while going about their work, and on some pages they are actually smiling.

A Fine Dessert was published in January. I read it sometime in the early summer. That’s interesting, I thought; a depiction of slavery presented without comment in a picture book. I’m surprised that hasn’t stirred up a little storm in the blackberry batter. But sure enough . . . 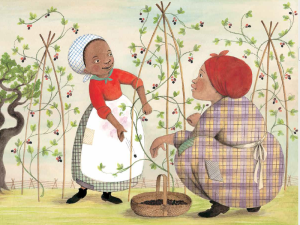 The controversy took a while to brew, and perhaps wouldn’t have developed at all if A Fine Dessert were not being buzzed as a Caldecott contender. There were probably some grumbles beneath the surface, but the full Twitter storm didn’t break out until October. Chief complaint: the author, and more so the illustrator, were inadvertently perpetuating the myth of “happy slaves.” How will black children feel about seeing the only black child in the book cheerfully going about her enforced labor?

The story caught NPR’s attention. Book bloggers began to take notice and have second thoughts about their earlier rave reviews. The folks at Reading While White took stock and regretfully “let go” of the book, which led to an apology by the author:

This is Emily Jenkins. I like the Reading While White blog and have been reading it since inception. As the author of A Fine Dessert, I have read this discussion and the others with care and attention. I have come to understand that my book, while intended to be inclusive and truthful and hopeful, is racially insensitive. I own that and am very sorry. For lack of a better way to make reparations, I donated the fee I earned for writing the book to We Need Diverse Books.

I’m sure the apology is sincere and hope anyone who took offense will accept it. To date, I haven’t discovered if the illustrator has issued a similar apology, but that’s up to her. There are a number of points we can agree on, mostly having to do with the fact that slavery was and is evil. Nothing can justify the institution, which degraded people created in God’s image, encouraged callousness and cruelty in their owners, and created a stain on our history that will never be washed away.

That said, does drawing a smile on a black girl’s face plant an impression of “happy slaves”? It’s hard to say what’s really going on in the mind of five-year-old picture-book readers, and what images will remain as more images pour in over the years. What the pictures say to me is that human beings are capable of finding moments of joy in the most straightened circumstances. Pictures of Jews smiling in a concentration camp wouldn’t create the impression of “happy Jews.” It was no place for smiling, but some occasions–an old joke or a piece of smuggled fruitcake or even the sight of a blooming poppy–might cause a broken heart to momentarily rise. The picture sequence in A Fine Dessert shows a mother and daughter working together, talking together, finally licking the bowl together behind the cupboard door (a very clear and age-appropriate picture of this family’s lack of freedom, come to think of it). Beauty remains: fresh blackberries popping on the tongue, work well done, and the love of a mother and child.

And humanity remains.  The slave girl of 1810 is contrasted with an English girl of 1710, a Boston girl of 1910, and a San Diego boy of 2010, all sharing some of the same simple pleasures and feelings.  They are all people created in the Image, with similar abilities, joys, frustrations–and worth.

I don’t know how much good it does to insist that alternate views or troubling situations always come with a warning label. I think kids know slavery was bad, and they’ll understand better as their frame of reference expands. To reinforce that knowledge every single time it’s mentioned or pictured becomes a form of overkill, and also robs developing minds of a sense of nuance.

A Fine Dessert is a lovely little book, widely recognized as such until social conscience belatedly weighed in. It doesn’t seem too much to ask that a work of art, unless it’s obvious propaganda, should be accepted on its own terms and not force-fitted into some notion of acceptable portrayal.