The Chosen Prince by Diane Stanley 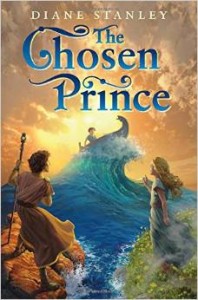 Recommended for: ages 14 and up

Bottom Line: A prince is chosen from infancy to reunite two warring kingdoms and bring peace to his people, but at great cost to himself.

At his birth, Prince Alexos is chosen by the goddess Athene to be her special champion. But the signs are troubling, especially to his father the king: how can it be that the boy will be both strong and foolish, weak and wise? These aren’t the attributes of greatness, but the augur (prophetic symbols) can’t be disputed. Stern King Ektor hasn’t much faith in his son but pushes him, at the tender age of twelve, to win glory by running in Athene’s festival race. Alexos is unwilling, for good reason as it turns out, because the race will have devastating consequences for him and his family. Only a long period of suffering, culminating in a dramatic shipwreck, will unravel the truth of Alexos’s destiny.

This story is elegant and graceful, much like the character of Alexos himself, who grows into a wholly admirable young man. There are several admirable characters; only one truly villainous. The narrative skillfully weaves strands of Greek mythology and history (the warring kingdoms of Arcos and Ferra could stand in for Athens and Sparta) into the backstory of Shakespeare’s The Tempest, to round out this tale of reconciliation and forgiveness. Character development trumps action, so for some the story won’t move fast enough (more telling than showing). For others, some of the theological issues will be troubling. The main one (mild spoiler here) is that the goddess Athene literally takes a hand at a crucial moment in Alexos’s youth, in an act that causes untold grief to him for years to follow. A thoughtful Christian reader will have already picked up on the resemblance of Alexos, suffering for his people, to Christ, but the comparison breaks down at several points. That could make for some interesting discussions, though.

Cautions: Language (one “bloody hell”; examples of swearing by the gods)