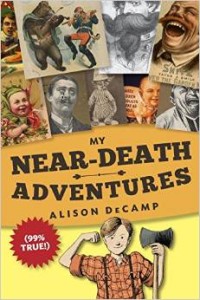 Bottom Line: Stanley Slater’s 99% true adventures in a Michigan logging camp, ca. 1880, are a bit short on plot but long on laughs.

“I’m a whiz at not dying, I don’t mind saying.” Stan is a whiz at many things he doesn’t mind saying, such as rolling logs and safely handling firearms. There is but one tragedy in his brief-but-exemplary life so far: he doesn’t know who his father is. No, make that two: his granny, whom he and his mother live with, is 98% evil, even though sometimes her evil quotient goes down to 54% or thereabouts. Stan is barely launched on his story before we realize he is an unreliable narrator if not a totally deluded one. But he tells “God’s honest truth” as he sees it, namely, his father is a heroic personage who writes him imaginary letters and is probably on his way back to Stan right now to reveal himself at the proper time and place. Such as the near future, in the remote north woods lumber camp where Stan’s mother (and Granny—argh!) has signed on to work as a cook through the winter months. Stan’s evil girl cousin Geri resides there too—but the upside is, he might find his dad among the hearty lumberjacks.

The storyline is rather thin and the premise a bit problematic (Stan is apparently illegitimate, but he doesn’t seem to understand what that means, or exactly what a man does to become a father). Some of his reiterated themes, like the inherent superiority of menfolk over womenfolk, grow tiresome. But he has an amusing voice, apparent not only in the first-person narrative but in his ever-present scrapbook. The author’s own great-grandmother kept such a scrapbook, composed of advertisements, postcards, and vintage photos: a treasure-trove of 19th-century trivia and memorabilia that will give readers a feel for the era worth reams of historical exposition. Examples are scattered copiously through the book, with Stan’s inimitable comments added.

Cautions: Language (a couple “Lord knows what,” one “hell”), Character issues (Stan as the product of an intemperate romance)