The Glass Slipper by Eleanor Farjeon 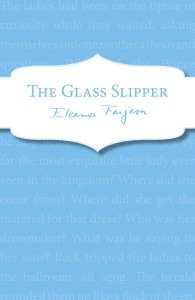 Bottom Line: Farjeon’s classic retelling of Cinderella is a fun read and may have inspired Walt Disney himself in the making of the animated Disney version.

Every now and then we remind readers of an older, out-of-print title, a niche book that will appeal enough to some readers that they are willing to hunt through library holdings, peruse used book stores, or succumb to the digital version of a classic story. Such is Farjeon’s The Glass Slipper. Originally published as a play in 1944 (in England), she turned the fairy tale retelling into a novel ten years later. A very interesting event happened in between, though: Walt Disney produced his famous animated Cinderella complete with talking animals, charming songs, and an image of Cinderella that has continued to delight little girls. Farjeon’s play/novel bear some striking similarities to Disney’s version, and she even sued Disney for plagiarism. [Disney won, citing that fairy tales are no one person’s property since they arose during oral storytelling days.]

Farjeon’s Glass Slipper is a romp through Cinderella’s story complete with ugly, rude stepsisters, an abominable stepmother, a loving but wimpy father, and a mysterious “crone” who transforms Cinderella into a breathtaking beauty the night of the ball. Cinderella reveals her kindhearted nature throughout the story as she offers food to animals, takes care of her father, and tries not to complain. In this version, it is not animals who talk but the “Things” that surround Cinderella (particularly the grandfather clock). Jaunty little songs sprinkle the text, and the reader will sense the theatrical elements that are holdovers from the dramatic version (as well as the Disney songs like “Bippity Boppity Boo”). A great fit for young, advanced readers who enjoy princess stories, this is also a good companion to the animated Disney version. Ask your children what’s the same and what’s different. While you’re discussing the book, ask them how Cinderella’s story reflects the story of Scripture and our need of divine intervention in order to bring about our redemption out of slavery and into new life.