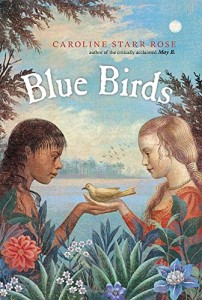 Bottom Line: This historical novel-in-verse delicately explores cross-cultural friendship against the backdrop of the lost Roanoke Colony in the sixteenth century.

Alis lands with her family on the New World beach, eager to be off the ship that held them captive for rough months at sea while they crossed the Atlantic. Weary and discouraged, they are miles from where they’d hoped to land. Father hopes to find Uncle and the crew that sailed months previously. I did not dream of seeing him so soon. Surely he and the other soldiers will set things right.

Kimi watches from the banks, hiding as only her people know how to do. Silently, she observes the strange ones disembark, marveling that they’ve come back. Are they spirits from the dead? Father said they were people like us, only with different ways. But how can I believe him? Father is dead.

Using verse and alternating perspectives, Rose weaves a delicate story of two girls who become friends despite the enmity between their two communities. Kimi and Alis delight in learning each other’s language and in discovering more about each other’s culture as they grow as close as sisters. Simultaneously, readers watch the two communities spiral into a seemingly unavoidable conflict: miscommunication (some intentional, but much stemming from two disparate languages and cultures), fear of the “other,” and deadly actions on the part of a few outliers fan the flames high. Kimi and Alis are caught in the middle, each trying to desperately save the other’s life as well as those of her family.

Kimi and Alis both must make hard decisions, decisions that force them to choose between their friend and their families. The verse format intensifies the emotional undercurrents even as it serves to highlight the similarities and differences between Alis and Kimi. While no parent hopes a child will choose friendship over family, we are told in Scripture that sometimes doing the right thing will require just that: choosing right over family. We also become part of a new family when we become part of the family of God; that new identity often forces a separation from our old ways of life. Readers will have much to discuss when Alis makes her final decision: Did she do the right thing? Would you make the same choice in her position?

cover image from amazon; advance reader copy from publisher (via netgalley) in return for a fair review