*You Are (Not) Small by Anna Kang 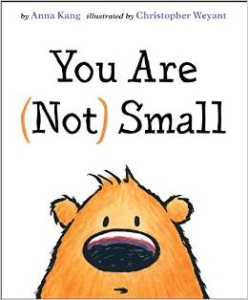 You are small, says one bear-like critter to another.  And from the looks of the first page spread, he’s right.  But then the little one replies, I am not small.  You are big.  Hmmm.  Can it be that the value of small and big depends on who’s talking?  But wait—what if a whole crowd of furry creatures join the larger of the two?  Strength in numbers, right?  They get to call the shots—unless the smaller of the two calls on more legions of his own. You Are (Not) Small won this year’s Theodore Seuss Geisel Award, given annually by the American Library Association to excellence in books for early readers.  With a vocabulary of about 25 words and clever illustrations by a New Yorker cartoonist, it accomplishes three goals: engaging young minds with humor, building confidence in beginning readers, and presenting an idea to think and talk about.

!
!
Get Equipped
Something went wrong. Please check your entries and try again.
Posted in (A) Ages 0-4, (B) Ages 4-8, Book Reviews, Easy Readers