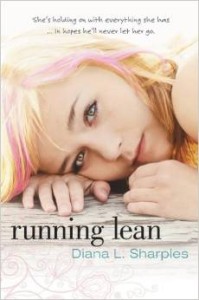 Recommended For: ages 16 and up

Bottom Line: Running Lean deals sensitively with teen love and the complications brought to it by anorexia.

Calvin Greenlee, 17, suffered the worst blow of his life when his brother Michael was killed in Iraq–but then Stacey happened, and that was the best.  She’s pretty, kind, artistic, a little quirky, and perfect. Except lately she’s been acting weird: moody, unpredictable, and…kind of sick. She also hangs around with Zoe Bernelli too much for his taste. Calvin could totally do without Zoe, and the feeling is mutual. After Stacey falls down in the school hallway for no apparent reason, he knows something is wrong, and before long he figures it out: she’s anorexic. She obviously needs help, but maybe he’s not the one to help her—actually no one is, until she will admit she has a problem.

Young love is usually fraught, but when anorexia is involved, it’s the fraught-est. The author makes us feel for these kids. Stacey has her underlying family traumas and needs, and Calvin has his conflicting motives: a sincere desire to do the right thing continually clashes with his understandable frustration—and once, rather harrowingly, with adolescent lust. (They don’t go too far but could have with just a little less integrity.) The subject of anorexia gets honest treatment, with Christian themes and prayer worked in more naturally than they often are. At 400 pages, it’s too long—we cover the same ground too many times, and Zoe bugs me—what is her deal? She’s egging Stacey on, but we never find out why. The two leads are well drawn and likeable enough to make us cheer for them.  Faith is more a key to problem-solving for them than a motivating force, but that is typical for this age.

Cautions: Sensuality, Sexuality (one make-out session that could have gone all the way if C. had not stopped himself)