Tuck Everlasting, Natalie Babbitt’s masterpiece first published 40 years ago, is as timeless as its title characters. 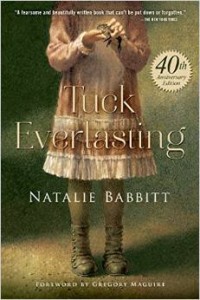 Time is holding still in the town of Treegap: the first week of August hangs at the very top of summer…like the highest seat of a Ferris wheel when it pauses in its turning. Winnie Foster, age 10, the only child of prominent parents, is finding her own family as oppressive as the weather and decides to venture beyond her front gate into the wood (always called “the wood,” never “woods”) that the Fosters own. There she encounters the Tucks—Pa and his wife Mae, steady Miles and mercurial Jesse.  Especially Jesse. Almost as soon as she encounters the Tucks, she is kidnapped by them. But wait: as the author informed us in the very first pages, disparate events can come together in unexpected ways, slowly revolving around an unsuspected center. Winnie’s kidnappers mean her no harm and in fact intend to shield her from making the same terrible mistake they did when they drank from an obscure spring in the middle of the wood. The water, perhaps something left over from some other plan for the way the world should be, grants eternal life. What some people would call a blessing, the Tucks know is a curse, and now they have a duty to keep the spring secret. But not everyone has the same goal, and the plot quickly ratchets up to a shocking act of violence.

Tuck Everlasting was originally published in January 1975 and has raised questions ever since. It’s one of those books that strikes the reader (this reader, anyway) as perfectly written, with not a superfluous word. The Tucks form a noteworthy ensemble of characters, with Winnie as their foil: a bold soul in some ways, but still a little girl taking hesitant steps into young womanhood. Her parents and grandmother are more anonymous, often taken as a unit referred to as “they.” At ten years old, she’s beginning to distinguish herself from them, as all children must do. The story is kept simple so we can focus on her and how she gains one small measure of courage and wisdom. It’s one of those stories where much is left unsaid so we can draw our own conclusions. I’ve drawn a few (see the discussion questions below), but they all rotate around the same hub.

And by the way: the 2007 movie has some poignant moments but makes Winnie slightly older and plays up a romance angle, as movies are wont to do. Ms. Babbitt didn’t like it at all: “It was a complete disaster.”

Cautions: Violence (one act of murder)