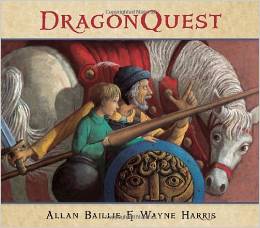 One-line Summary: A courageous boy and an elderly knight seek the last dragon in this exciting picture book with a surprise ending.

“Hey, you!…Up, up, up, we have deeds to do!”  The young hero is reading a book when he receives this challenge (note the title of the book), and the challenger is an elderly knight setting out on his last quest—appropriately, to slay the last dragon. In soaring language the old fellow describes the bold deeds, awful perils, green glittering eyes, flashing claws, and fiery breath that lie ahead—“Now, there’s a grand quest!” They set off through reptilian desert and haunted wood (your little quester will have a great time finding all the perils in the wonderfully detailed illustrations). Finally they arrive at Glass Mountain, lair of the Last Dragon. But the beast appears to be nowhere about. Can they find him? Kids will love the surprise revealed on the last page.

Dragon Quest was originally published in the 1990s in Australia. Near as I can tell, the American edition is new. Some reviewers have complained about its gender-specificity (Girls can fight dragons, too!), but that’s the point: “For boys, it’s also a delightful exploration of what it means to be a man,” wrote Helen Sykes, the original publisher, in the afterword.