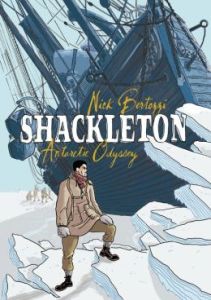 This is the second of Bertozzi’s graphic series on explorers. (The first is Lewis and Clark: The Greatest Adventure in American History.) His books are notable for a casual style and a focus on personalities and relationships. The approach may need a little preparation—read a summary of the Endurance expedition before starting this book, and you may get into it more easily. It’s enjoyable as it is, though, and readers who are already interested in the subject will want to go on from there to learn more (check the bibliography). The author begins with previous Antarctic expeditions: Scott I, Shackleton I, Amundsen, Scott II—all of which establish the peril that Earnest Shackleton willingly confronted when he launched his second expedition, hoping to be the first to cross the continent over land. Not only him, but his 27 crewmen (all of whom knew what they were getting into) and 34 dogs (who did not). Spoiler: none of the dogs made it, but all the men did. It was a near thing, though. The story focuses so much on the men themselves and how they passed the time—contests, good-natured ribbing, freezing, and starving—that it’s easy to lose sight of the overall narrative arc. But it’s an engaging introduction to this story of the earth’s last frontier.