The Castle Behind Thorns

The Castle Behind Thorns, by Merrie Haskell. HarperCollins, 2014, 341 pages. 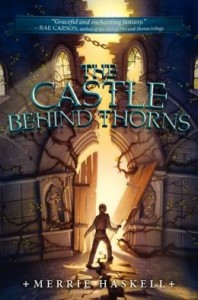 Sand awoke curled in the ashes of a great fireplace. He doesn’t even remember falling asleep, and his surroundings give him no clue how he got here—wherever “here” may be. As he explores the place, he begins to realize he is inside the ruined castle that has figured in the background of his life as long as he can remember. It’s surrounded by a giant hedge of thorns that are malicious as well as impenetrable, and there’s no way out. Inside, everything is broken—everything, from the tallest pillar to the smallest dish. As a blacksmith apprentice, Sand knows something about fixing, so he begins to fix, and seems to have an extraordinary gift for restoring these particular broken items. It’s another question, however, whether he can fix the princess—the sleeping princess of legend, who has somehow awakened and staggered half-dead into his life.

If you’re current on your fairy tales, you’ll soon begin to recognize the basic structure of “Sleeping Beauty.” But the author does some very interesting things with it. Princess Perrotte comes with a lot of baggage: “You chose anger over Heaven, Perrotte. You would not forget and move on,” she is told. But Sand also, though a much more likeable person, has his own pride and resentment to overcome if their castle is ever to be completely mended. The novel is saturated with a Christian consciousness, though readers should be warned that there are two instances of medieval swearing (i.e., swearing by body parts of God). I wish they weren’t there, but the theme is redemptive and the language often beautiful (for example: The sun was the sky’s fire, driving color before it like a forge fire drove color through metal.) The plot may promise more action than it delivers; character development is the fascination here. Though Perrotte can be prickly, it’s well worth getting to know these two.

Also by this author: The Dragon Slayer’s Handbook