Through Middle-Eastern Eyes: I Am Malala and Hidden Girl

Two real-life memoirs of girls living in a turbulent time and place:

When we are young, it is often the emotion of an experience that stays with us the longest. A child might not 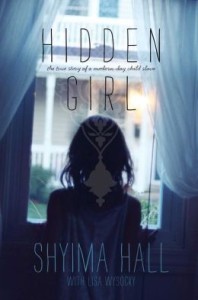 remember the details of a bad dream, but the feeling of terror the dream brings can last a lifetime. That’s how the day I was sold into slavery was for me.”

She was only eight, one of eleven siblings growing up in a two-room apartment near Alexandria, Egypt, when her mother took her to the rich lady’s house in Cairo. Shyima knew there was trouble; her older sister used to work in that house, but she’d made off with stolen money. Or that was the story. Sahra, debt, had to be paid, and the rich lady said she’d take Shyima as a substitute to work it off. With a sinking heart, the girl heard her own mother agree to the terms.

Life was bad enough working 18 hours a day, seven days a week, with literally no time to eat except for one meal taken on the run. But her burdens increased when her masters decided to move to the USA—temporarily, they said—to escape legal trouble in Europe. Shyima was the only servant they took with them, because she was small and easily intimidated and her parents could be tricked into signing false papers. It was totally illegal, but Shyima endured twenty months of unrelenting labor in the States before someone noticed her unusual demeanor on family outings, or saw her working past midnight, and made a call to Child Protective Services.

Shyima, who spoke no English until she was 15 (and is now only in her mid-twenties) tells her own story in slightly stilted but passionate language: of her rescuer and champion Mark Abend, the ICE agent who never rested until her captors were behind bars; of the three foster homes (two Muslim, one Christian) that—in spite of their many flaws—aided her transfer into 21st century America; finally of her efforts to gain citizenship and of her love for the “land of the free.” The transfer was by fits and starts: “I had never anticipated how difficult it would be to change my mind-set from being a captive to a free person, or how complicated life would get in the process. Many people in my life thought I should be happy for what I had, happy simply for my freedom, but it wasn’t that easy. Happiness is not a switch people can turn on and off.” At the close of her story she is a single mom with a daughter, but her boyfriend is determined to be there for her (why don’t they just get married?!).  Happiness seems within her grasp, and she’s grateful to God for a hard-won life. 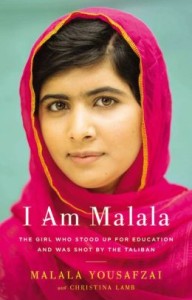 Malala was born in Pakistan’s Swat Valley and blessed by a forward-thinking father who encouraged her education. That was the problem, once the Taliban took control of the valley in 2008. Malala’s father, a teacher and headmaster, did not stop speaking against radical Islam and for progressive values like education for girls. He was the one his family worried about. But on October 9, 2012, the van carrying Malala and her friends to school was stopped near a checkpoint. A man wearing a peaked officer’s cap stepped up on the tailboard and leaned in among the girls. “Who is Malala?” he asked. When everyone glanced at her, he pulled out a pistol and shot her in the head.

Most of us have heard that part of the story: “The Girl Who Stood Up for Education and Was Shot by the Taliban.” In this book, an international best-seller, Malala herself fills in the details of her early life and growing fame as an advocate for education. Her speaking out on blogs and over the radio brought her attention even before the Taliban attack; she was meeting diplomats at the age of twelve. Such a public persona was bound to draw fire eventually.

Her memoir isn’t packed with winsome details of growing up in an alien culture (alien to us, that is); Malala was apparently born with a political bent, and is eager to share her view of world events. She’s unsparing toward General Musharrif (the “buddy” of President Bush) and not all of America’s actions after 9/11 win her applause. Though critical of Muslim extremism (“If Christians, Hindus, or Jews are really our enemies . . . why are we Muslims fighting against each other?”) she’s loyal to her faith and heritage. Some of her opinions don’t seem that far removed from tribal culture: “[We Pashtuns] neither forget nor forgive. That’s also why we rarely say ‘Thank you,’ because we believe a Pashtun will never forget a good deed and is bound to reciprocate at some point, just as he will a bad one. Kindness can only be repaid with kindness . . . not expressions like Thank you.”

Though some of her attitudes may seem strange to us, there’s no doubting Malala’s courage and desire to do good. Getting inside her world for a while will expand the reader’s own.  NOTE: A “young reader’s” edition of I am Malala is available now, but I haven’t had a chance to look at it.