Lucy is used to moving—it’s her third time in 12 years. This time, her photographer dad and computer-programmer mom 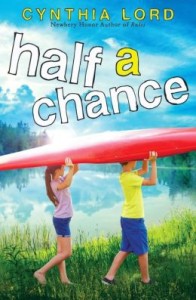 have moved to a New Hampshire lake mostly populated with summer people, so the friends she makes won’t be around to start school with. But that doesn’t seem to matter so much when she meets Nate-next-door and his family, including the matriarch, Grandma Lilah. Dad barely has time to unpack before he’s off again, this time to Arizona on assignment for National Geographic. But in his spare moments he’s going to judge a kids’ photography context, and Lucy has a secret plan: to enter her own pictures in the contest under another name. And win, of course. Maybe then her dad will take her seriously.

Chapters are named after categories in the Photo Scavenger Hunt contest: Skip, Lost, Beyond Reach, Sticky, etc. As we follow Lucy and Nate on their quest for subjects, readers are invited to see the world as she does: “[Dad] says it’s just as important to show the hard things in the world as it is to show the beautiful ones. Even in the midst of horrible things, there are bits of wonder, and all of it’s true.” Wonder is on offer from the loon pair who build their nest on an island in the lake and invite observation. But there are horrible things in nature and frightening things close to home, which cause Lucy to rethink beauty. She comes to see it’s a matter of perspective: a very useful lesson for a middle-grader. Half a Chance offers a nice closeup of life, expertly shaded. The spiritual dimension is lacking, though; Lucy offers gratitude to “the universe” twice with no acknowledgement of its maker. 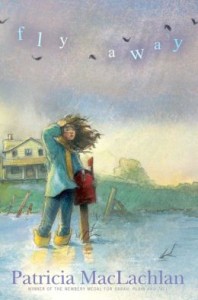 MacLachlan continues her run of short, quiet stories for young readers (see White Fur Flying, The Boxcar Children Beginning, and The Truth of Me). Here’s another Lucy, age 9, big sister to Gracie and Teddie and daughter to “Boots” (so called because he wears them) and Maggie. Currently they’re all on their way, in a beloved VW Bus, to visit Maggie’s aunt, better known as Frankie, in North Dakota. “Frankie’s house is the house where Mama grew up. Mama loved it and hated it at the same time. She always cries when we get there and cries when we leave. Maybe one day I’ll understand that.” Lucy would like to understand a lot of things, such as why she’s the only one in the family who can’t sing. Even little Teddie sings, though not for anyone but Lucy; it’s their secret. Lucy has another secret: she can make words sing, and someday she’ll be a poet.

The everyday intrudes, such as Mama’s chickens that she can’t leave home without, and Boots’ newfound love for cows. “My parents are crazy.” But Frankie is worse than crazy; she’s stubborn, especially about her house and her determination not to leave it, even though it’s right by the river and the rain has not let up. The prospect of a flood puts a serious damper on a family vacation, and in the crisis that follows, secrets are revealed. Family stresses and family strengths form the core of this story, along with the saving grace of creativity.

Our summer reading challenge starts on Monday! Don’t forget to sign up to be eligible for some great giveaways!