Rounding Up Some Good YA Reads

As Hayley noted earlier this week, the much-heralded final volume of Veronica Roth’s Divergent trilogy was a disappointment.  Much-heralded final volumes often disappoint, but what’s worse, they draw attention away from less-heralded novels that deserve notice.  These three titles range wide in content and theme, but all are worthy additions to the literary, mystery, and adventure categories. 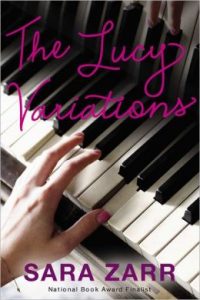 Lucy Beck-Moreau has given up concert piano at age sixteen, before her career was fairly launched.  Not even she can quite understand why, but the obvious pushiness of her achievement-driven mom and grandfather has a lot to do with it.  Since their family, rounded out by her self-effacing dad and gifted little brother, live with Grandfather Beck (and largely off his fortune), he’s an ever-present, overwhelming personality.  If he says Lucy is done with performing, she’s done.  Now for the life of an unintentional teen—hanging out with friends, crushing on her English teacher, sympathizing with her best friend while bff’s parents go through a mean divorce.

But something is missing, and when her brother’s new music teacher shows up, she realizes what it is.  No, it’s not Will (the teacher), although at first Lucy thinks she might be falling in love again.  Misplaced love is a prominent theme, but so is love itself: what it is, what it’s for, and where it should be directed.  And what is the ultimate origin of love?  The author doesn’t say, but from the acknowledgements, I think she knows.  Lucy already knows that the world is full of beauty—“She wanted to grab hold of it and take it all down into her bones.  Yet it always seemed beyond her grasp.  Sometimes by a little, like now.  The thinnest membrane.”  The world is also full of things that can be loved for their own sake, and for the deep longings they stir up within.  “’Why do people . . . we  . . . why do we drag around like life is so awful?’” she asks.  Life has its share of awful moments, but The Lucy Variations is a very welcome counterbalance to the many YA books about depression, suicide, addiction, violence, and a world falling apart.  Through spending time with these characters we learn to sympathize with them, even Grandfather Beck, who had “leaned heavily, his whole life, on these things that weren’t his own.”  The novel contains infrequent use of vulgar language that will put some readers off, but for style, content, and theme, this is a novel thoughtful teens may find well worthwhile.

If 15-year-old Emily had not been lying in the grass behind her house that summer day, waiting for a bee to land on her nose, she would never have made the acquaintance of the attractive young man who introduced himself as “nobody important.”  She plays along (I’m nobody! Who are you?) and finds herself liking him very much.  So it’s really too bad he ends up face-down in the Dickinson pond, very dead.  But why?  Some things don’t add up, and Emily is determined to get to the bottom of the mystery.  She is witty, prickly, determined, and maybe a bit too blase  about the death of a fellow she liked a lot.  But, assisted by her 12-year-old sister Lavinia, she’s up to the challenge of handling a standard whodunit.

Facts about the real Emily Dickinson are seamlessly worked in—even more impressive, fragments of her poems flit by in the dialogue (“I would so much rather be anonymous.  It’s dreary to be somebody.  One doesn’t have any privacy at all”) and show up explicitly in chapter headings.  An engaging premise and main character make this a winner for fans of cozy mystery and a certain Amherst poet.

When we first meet Ethan Wynkoop, he is speaking truth to power in a classroom of his fancy D. C. 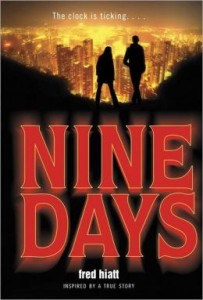 private school.  The power is his history teacher Mr. Stotz, who has just called Mao Zedong “the father of his nation,” like George Washington.  Ethan: “I said I didn’t recall that George Washington ever caused a famine that killed twenty million of his countrymen.”  That stirs up a lively debate with an offended a Chinese student, with Mr. Stoltz encouraging sensitivity to other points of view.  Ethan is a true advocate for the downtrodden, an attitude most of his classmates find rather tiresome.  But not Ti-anna, whose father is a Chinese democracy activist who yearns to go back to his homeland and work toward that goal.  Chen Jie-min gets his chance, but it seems the authorities are not all that ready for democracy.

“When Ti-anna’s father disappeared, it wasn’t one of those sudden things.”  By then she and Ethan have become close friends, so perhaps it’s not surprising that Ethan would get his crazy idea.  What is surprising is that they would actually do it: fly to Hong Kong without telling anyone, and start looking for Chen.  A lack of parental supervision makes this possible: Ti-anna’s mother has become increasingly withdrawn and Ethan’s parents, high-level physicists, are attending a conference in Geneva.  With just a little arm-twisting and finagling, off they go, on an adventure that Ethan will have plenty of opportunity to regret.

The author has worked for the Washington Post for 32 years, including a stint as bureau chief at the newspaper’s northeast Asia branch in Tokyo–so presumably he knows what it’s like to dodge traffic in Hanoi and spend a miserable night on the beaches of Lamma Island.  Though the action doesn’t ever rise to the fever pitch of an Andrew Klavan novel, it moves right along.  Stakes are high, including a brush with Asian sex trafficking, but the language stays clean and the two leads never fall passionately into each other’s arms.  Ethan is a secular crusader, not a religious one, but it’s easy to identify his concern for prisoners of conscience with concern for the persecuted church.  The story is a timely reminder of the need for resistance to injustice, and yes, the kids have plenty of opportunity to repent their foolhardiness.  Still, as Ti-anna concludes: “With our rights come responsibilities to use whatever strengths we have to stand on the right side of history.”

For more YA recommendations (or titles to avoid), browse our reviews: simply click the YA designation in the drop-down menu of the Book Review tab at the top of this page.