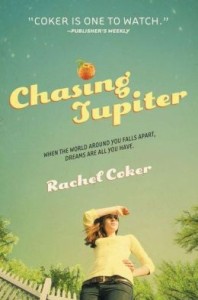 Our story begins in small-town Georgia, 1969—but 16-year-old Scarlett’s world seems even smaller than the town. Since her rebellious older sister Juli is sneaking out at all hours, so much responsibility falls on Scarlett that there’s no time for friends or extra-curricular activities. The chief demands are her odd little brother and her senile grandfather, who lives with the family.  We immediately recognize Cliff, the 12-year-old brother, as autistic, even though that word is never mentioned.  (Autism was only beginning to be recognized in the 1960s.)  And Grandpop manages to be loveable even while being difficult.  One bright spot is Frank, the boy sort-of next door, who seems a little too good to be true.

Cliff’s birthday is coming up, and the top item on his birthday list is a rocket to Jupiter.  Scarlett decides to spend the summer 1) earning the money to build it and 2) building it.  Frank gets interested in the project (though Scarlett suspects he’s a lot more interested in Juli), and the summer is going pretty well until it all goes south with shocking speed.  If home is supposed to be a place of security, why is it so often the very place where conflict begins?  Why do couples have to fight all the time?  And over such stupid things.  A lump formed in my throat.  Why do they call it family when it isn’t even strong enough to handle things like that?

Author Rachel Coker is not twenty yet and this is her second published novel.  That’s impressive in itself (another homeschool success story!) and the novel is impressive for its restraint and sympathy.  I like how characters who seem headed for caricature turn out to be real people worthy of respect, and how being a believer doesn’t mean happily-ever-after.  Maybe getting sad is part of growing up . . . because things change, and you can’t stop them from changing.  Change, and sadness for that matter, are seen as tools of redemption.

Toward the end the novel begins to feel a little sketchy, maybe because it tries to address too many problems: money worries and Juli’s delinquency and Cliff’s unnamed syndrome and her parents’ disagreements, etc.  It’s all believable but needs more room.  For example, Grandpop’s condition would mean more to us if we had some glimpses of him before he began to lose his grip on reality: a few flashbacks would round him out for us.  Scarlett’s spiritual growth could use more attention also, though she acquires a mentor and we assume she’s on her way.  The big breakthrough in this novel is learning to accept her family’s limitations and imperfect love, and both Scarlett and the author believably accomplish that. 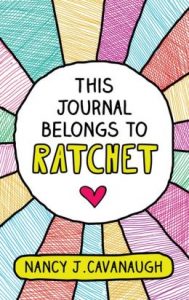 Eleven-year-old Rachel—a.k.a. Ratchet–Vance has family problems, too, but since her family consists of two people that means one big problem: Dad.  Her mother died when Ratchet was five and Dad won’t talk about it.  In fact, he won’t talk about the late Mrs. Vance at all.  That’s one problem.  Another is that he insists on home education, even though he’s so busy with his shade-tree mechanic’s business and fixing up houses and campaigning for environmentalist causes he doesn’t have time to oversee her schooling very closely.  Their main father-daughter time is working on cars together—hence Ratchet’s nickname.

But it’s the start of a new school year, and even though nothing has changed about Ratchet’s school she’s determined to change some things about herself.  Her two main goals are to make one friend and to Be more like Mom, which means finding out about Mom.  Both goals take unexpected turns, chronicled in a series of writing assignments in her brand-new journal.  The assignments take different forms: free verse, definitions, descriptions, essays, narratives, and Ratchet excels in all of them.  (Besides telling a story, her journal becomes a primer on styles and types of writing.)

Meanwhile her frustration with Dad rises, along with the reader’s.  Truth to tell, Dad is a bit of a nut, always showing up at city council meetings to berate the pols and warn of environmental doom and gloom.  His latest cause is saving the local green space, which being sold to a developer to build a strip mall.  Though sympathetic to the cause, Ratchet feels like she’s been left out in the cold: Dad is saving the planet for the Good Lord.  Sometimes I wonder if anyone is worried about saving me.  Frustration turns to fury, until the inevitable revelation that changes everything.

Rachel/Ratchet seems a little too young to be expressing her profound thoughts and carrying out her final challenge (involving a vintage yellow Mustang).  I also find it hard to believe that in all her eleven years she hasn’t had a single friend.  But she builds up a portrait of one of the more memorable parents I’ve encountered in children’s literature, and I like that Ratchet discovers ways to build on her strengths and persevere in her goals, accomplishing the change she desires though not in the way she anticipated.  I also like the unexpected developments (though some stretch credulity just a little) and realistic twists to fairy-tale endings.