As noted in last Tuesday’s post,I encountered Maurice Sendak when I was myself a child.  My 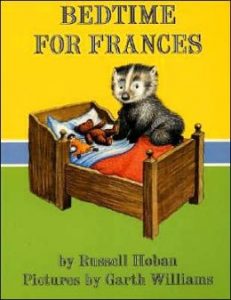 acquaintance with Russell Hoban had to wait until I had children of my own, and we met over that classic childhood dilemma: going to bed and staying there.  Bedtime for Frances, published in 1960, introduced a self-willed, imaginative, and ultimately lovable character who would survive and thrive over five more picture books and at least two generations.  Hoban wrote the original story about a little girl, based on episodes with his own four children.  Apparently it was the illustrator’s inspiration to picture Frances as a little badger with a wide, guileless, white-striped face.  Since the original illustrator was the great Garth Williams, his instincts carried the day.  Further Frances adventures were illustrated by Lillian Hoban, the author’s wife, who of course retained the fur.

Here’s what I learned from Frances: children have a job, and that job is growing up.  This is clear in the first book, when her exasperated father explains the facts of life.  “Everybody has job.  I have to go to my office at nine o’clock.  That’s my job.  You have to go to sleep so you can be wide awake for school tomorrow.  That’s your job.”  And if she doesn’t do it, Father will have to resort to corporal punishment, but fortunately Frances takes the hint.  On her way to adulthood, she meets the challenges of everyday life with the force of her developing personality and creative imagination.  She has a little song for every occasion.  On eating eggs, for instance: I do not like the way you slide,/ I do not like your soft inside,/ I do not like you many ways,/ and I could go for many days/ without eggs.  What a way to give voice to a young child’s feelings! 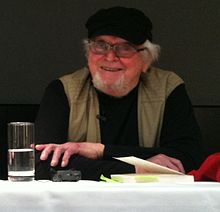 But she also celebrates happy times.  In Best Friends for Frances, her friend Albert kicks her out of a baseball game because girls can’t play baseball.  In return Frances arranges an “outing” with her little sister Gloria, and excludes Albert.  But she’s not hard-hearted enough to follow through, so the three end up having a lovely time under the trees, during which they sing a song she made up on the spot.  We used to own several Frances stories on vinyl records, read by the great Arnold Lobel (of Frog and Toad fame) and Broadway actress Alice Playten.  I don’t know if these records have been converted to CD, but they’re worth getting your hands on if possible.  Both the voices are perfect, and most of the songs are sung, which is why I can sing Frances’ exuberant picnic song from memory:

When the wasps and the bumblebees have a party, nobody comes who can’t buzz.

When the chicks and the ducklings have an outing, everyone has to wear fuzz.

When the frogs and snakes have their yearly clambakes, there’s plenty of wiggling and hopping:

They splash in the pond, and the marshes beyond, and everyone has to get sopping!

Hoban’s other classic for children is The Mouse and His Child (1967), a novel about a clockwork mouse 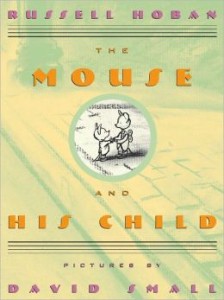 daddy who spins in a circle when wound up, swinging his little mouse son up and down.  The two are kept in a box and only brought out for Christmas, until the fateful Christmas when they’re discarded after an accident.  What follow is an unfortunate-toy scenario,  like the Steadfast Tin Soldier or Pinocchio or Kate DiCamillo’s The Miraculous Journey of Edward Tulane.  But in spite of all the characters who die, it’s a touching story of redemption and transformation, that’s probably worth a longer post one of these days.

He wrote for adults too—almost as many adult novels as children’s books, of which the best known is Riddley Walker.  This is worth reading if you have the patience: a dystopian story of Britain in the far future, with civilization’s infrastructure long gone but her spiritual roots still twitching.  The part that requires patience is the voice, which Hoban invented, kind of a pidgin English with technological, biblical, and quasi-medieval echoes.

His last book, Rosie’s Magic Horse was published early this year, 14 months after Hoban’s death in December 2011.  Illustrated by another legend, Quentin Blake, it’s a 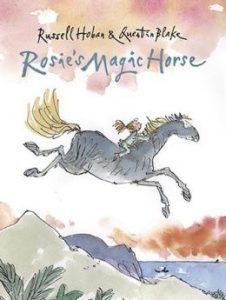 triumphant tale that begins with sadness: on a warm summer day somewhere in England, a boy buys an ice pop and, after enjoying the cold sparkly goodness of it, throws away the stick.  The stick is feeling despondent and useless until Rosie happens along—for what could be more useless than a stick?  But she’s a girl who knows the value of a perfectly milled piece of wood.  She has a box full of them at home, even though home isn’t too cheerful at the moment because bills are due and there’s no money to pay.  Rosie picks up her parents’ worry as she goes to bed.  Meanwhile, the sticks are having their own little pity party.  “Without our ice pops, we are nothing, said the oldest stick.  “I am not nothing,” said the new stick.  I could be something . . . Maybe a horse.”  That’s the spirit!  The sticks get to work and assemble themselves, and before long, Rosie has a noble steed to carry her to adventures unknown.  Where she may even find treasures waiting . . .

If wishes were horses, beggars could ride, but Rosie’s ice-pop sticks give her the ride of her life—and it may not be all a dream.  It turns out that anything can be put to good use with determination and creative thinking.  Though the story doesn’t have the down-to-earth veracity of Frances or the poignancy of The Mouse and His Child, it’s a fanciful ride into the sunset for a children’s writer of noteworthy accomplishment.

NOTE: Each of the Frances books is available in an “I Can Read” edition.  I would give these a pass.  The original books are easy enough to read, with a certain elegance-in-simplicity that’s hard to match even in a slightly-altered version.