Toddling into the Word: First Bible Storybooks and Early-Reader Bibles

What could be more appropriate for Holy Week than a survey of children’s Bibles and Bible storybooks?  That’s what I foolishly 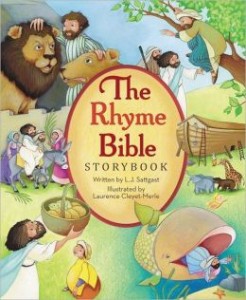 thought, treatment but this project became a version of The Blob the deeper I waded into it.  Amazon.com has over 100 pages under the heading “Children’s Bibles, medical ” though many of those are storybooks.  Christianbook.com lists over 950 titles under that same heading, and less than one-fourth are storybooks.  The rest are actual Bibles—Fire, Precious Princess, Superheroes, Berenstain Bears, Veggie Tales, Precious Moments—even the Bug Bible (though there’s nothing particularly buggy about it besides the cover).  It took a week just to get a handle on the subject.  But a worthwhile week, I think.  “I have no greater joy than to hear that my children are walking in the truth” (III John 4): that’s the prayer of most parents, and walking in the truth means spending time with the word of God.

But where to start?  How do we lead our children into the word?  This project began when I received a collection of resources in the mail and started to sort them out: everything from The Candle Bible for Kids, Toddler Edition, to the Once-a-Day Devotional Bible for Teens.  Some of them I liked, some I thought were interesting, and some I couldn’t see any practical use for.  In order to present a well-rounded picture, I did a little research, which turned into a lot of research, which sent me back to the beginning—babies who have just learned to walk and are madly racing into toddlerhood.

About the ratings: it seemed that our usual split between worldview/moral value and literary value didn’t apply for these, since the worldview is, obviously, biblical.  So I just gave them a general rating of 1-5.  Though the review should indicate the “why” of a particular rating, some of it is my personal judgment and if there’s a title you are particularly interested in, you should check it out further for yourself.  Also, this collection is far from exhaustive.  We’ll get to more of them in time, and please let us know about your own favorites!

How simple are stories for a toddler?  Very.  These are all short and sweet with almost no context, but I can see two advantages for this age: the small size and durable padded cover make it nice for little-bitty ones to have their very own Bible to carry to church, and reading these stories will familiarize the kiddoes with Bible names and objects like Temple and King.  Very little about it will be upsetting.  Almost no one is killed—except Jesus—and there are no scary images. I had a few problems with pictures: Why are Adam and Eve shown as children?  And why does everybody, even animals, have to look so cheerful?  I also found a few inaccuracies, such as The people thought [Jairus’ daughter] was dead. (News flash—she was dead.)  And after Zacchaeus promises to return the money, He became a good person (that wasn’t entirely the point).  I would also like to see more of God involved in the action: When he grew up, Moses helped his people.  He went to the king of Egypt with his brother.  “Let our people leave your country!” they said . . . Then many terrible things happened in Egypt.  I think toddlers can and should understand that God sent Moses, and those terrible things didn’t just “happen.”  Though not board-book thick, the pages are heavy and the illustrations are simple, with superfluous animals (find the bunny) on most of the pages. 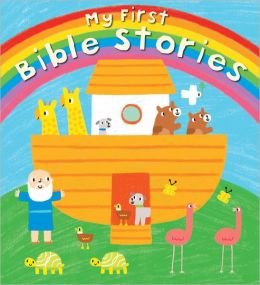 Creation—Noah—Baby Moses—David—Jonah—Daniel & Lions—Baby Jesus—Two Builders—Jesus and children—The Lost Sheep—Death and resurrection.  That’s it!  Hardly comprehensive, but the stories are told with a sense of drama and immediacy that belies their simplicity:

Down by the riverside, Miriam watched.  Would anyone see the basket she and her mother had hidden?  Would the wicked king’s soldiers find the baby and harm him?

I like the illustrations, which look like they could have been done by Mrs. Plum’s first-grade Sunday-school class–brightly colored and simply composed.  It’s roughly picture-book size, about 9 X10, but it will still fit in a diaper bag or tote to carry to church.  Pages are a little thicker than the Candle Bible, with a chewable padded cover.  Little readers should be past the chewing stage, though.

Now we’re getting serious—in page count, at least.  The Rhyme Bible has been around since the 1980s, charming preschoolers.  This one, for the run-around-in-diaper set, has much charm of its own.  There are 26 stories—12 Old Testament, 14 New Testament—and lots of pictures.  I think the rhyme works best for toddlers; words and concepts are naturally simplified, making for a better fit where the rhymes don’t stick out and call attention to themselves.  For example:

There’s no story of the Fall, but toddlers won’t miss it.

This is a new edition with new illustrations.  Bold and brightly-colored, some of the pictures are striking, such as the one of Abraham in his bed beside a sleeping Sarah, staring upward with a hopeful smile as he remembers God’s promise.  Or the one of Daniel face-to-face with a very ferocious lion.  The pages are thick and the binding is very nice and durable-looking.  One big plus in the narrative: God is the main actor, central to the story, always speaking and doing.  Otherwise I’m not that fond of the rhymes.  Even though children like them, I’ve heard picture-books editors say that submission for rhyming books usually turn them off, because it’s very difficult to do well.  Awkward rhymes seem especially glaring in a Bible story, such as God—clod; permission—population; Israelites—impolite.  Then there’s the whole mad-sad-glad-bad loop.  Sometimes the forced rhymes even lead to questionable theology, such as

“Created in His image” is a difficult concept, but it doesn’t really mean being “a lot like” God.  Another example: God tells Moses “Listen to my plan:/When I’m through with Pharaoh/He will be a different man.”  Sadly, no, or else Pharaoh wouldn’t have chased the Israelites into the Red Sea (unless “different” means dead).  Though more comprehensive than the Toddler version, it leaves out the Tabernacle and Temple, King David, and the Ten Commandments, but includes Nehemiah and Esther.

Beers is the author of several Bible storybooks and resources for the very young.  The Early Readers Bible includes 64 stories, told with standard grade-level wordlists, each followed with a question or application activity.  For instance: Put BAD, SORRY, and PRAY on some paper.  Put this where you will see it each day.  When you want to do something bad, look at it.  Are you sorry?  Then pray.  Limiting words also limits concepts and detail, as seen here:

But the king did not obey God.  So God hurt the king and he hurt the king’s people.  The king was afraid.  He said, “Take your people and go away!” so Moses and his people went to a new home.  They went far from the king who said no.

Each story has a “value” to learn, like Prayer, Obeying God, Sharing, etc.  This comes across as preachy, but at this age that’s not necessarily a bad thing.  Preschoolers usually don’t grasp the concept that they’re hopeless sinners in need of redemption, even if they learn to parrot the words.  Each Christian recapitulates the history of redemption in his or her own life: learning right from wrong, inclining toward the wrong, trying and failing to do right, recognizing the “wretched man” within, and finally turning to Christ.  Aside from that, the Early Readers Bible is too clunky to read aloud with enjoyment, but kids who read it for themselves can feel a real sense of accomplishment.

Forty-four phonics sounds are introduced in 61 stories.  Unlike the Early Readers Bible, the text is not governed by word lists.  Nor is it a primer that drills on letter sounds and simple words, but the early reader will see phonics sounds reinforced in Bible stories they can read (mostly) for themselves.  Some of the words, even in the first few chapters, will be indecipherable by a beginner, so an adult or older child needs to be nearby (or you can get the CD).  Each story introduces a vowel, consonant, or blend, highlighting those letters in red.  For example, the first story incorporates short a:

Or later, with short o:

Some of the stories review all of a particular letter group, such as long vowel sounds: “You will not believe what God will do./Just wait till you see what he’s planned for you!”  Not all the text rhymes but most of it does, with the usual problems.  Some Amazon readers complained about the use of words like jerk and stupid, employed for rhyming’s sake.  The author pairs jerk with work, for example, making me wonder if rhyme is actually the best way to teach phonics, since so many of the rhyming words aren’t spelled the same way.  It’s been a long time since I taught any phonics, though, so maybe it’s not that much of a problem.  The illustrations are humorous without being jokey—or at least I thought so until that last page, showing the derriere of a pig trotting down the road over the words THE END.  Not a fitting finale to Revelation, perhaps . . .

(NOTE: I had this review all written up before realizing the book was out of print.  Used copies seem plentiful, though.) 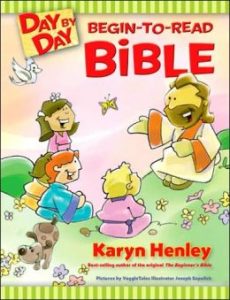 Karyn Henley, author of the popular Beginner’s Bible, retells stories and paraphrases texts from every book in the Bible, except for a few epistles.  (Many of the Pauline epistles are interspersed with readings from Acts—great idea!)  The young beginner has a one- or two-page reading for Monday through Friday, with an “I did it!” checkbox for each.  For the weekends, the author suggests reading aloud designated stories from the Beginner’s Bible, but those aren’t necessary for continuity or understanding.  The language is not rigidly bound by wordlists or rhyming demands, so it reads more naturally.  Here for example is her loose paraphrase of the Psalm 8:

Lord, our Lord, your name is great!/Your greatness is higher than the sky./You planned for children and babies to praise you./I see the sky you made with your hands,/I see the moon and stars you put in place./Than I wonder why you even think about people./I wonder why you care about us . . . .

Not the most graceful rendering, but one that kids can get their minds around.  A few times the wording is questionable, as in “Tell them you were sent by THE ONE WHO ALWAYS IS,” said God.  What’s wrong with “I AM”?  The illustrations are friendly and a little too cartoony for my taste—my main problem with the Beginners Bible–but overall I like this version a lot.

So, once a child has learned to read, we want to get him or her a real Bible, not a storybook.  And that’s where the fun really  begins . . . .

Come back Friday for a primer on translations and paraphrases!  For now, check out last fall’s roundup of Story Bibles and Devotional Guides, as well as Thoughts to Make Your Heart Sing and Emily’s very first post on the subject of story Bibles.