These three books have nothing in common except their general category and the fact that the first two won honors in the ALA Youth Media awards for nonfiction this year.   The fact that both Titanic and Moonbird won in two age categories–middle-grade readers and young adults–makes me wonder if there’s not that much quality nonfiction being published right now, if the librarians of the ALA just aren’t reading widely in this area.  In any case, nonfiction is considered a growth industry in the publishing business these days because of the emphasis on it for the “Common Core” curriculum.  That’s not a bad thing, of course (more nonfiction, that is; we have our doubts about Common Core), as long as the quality is high and the biases are not so glaring. 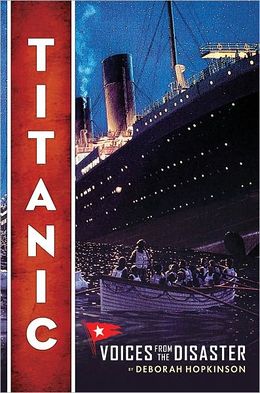 Frankie Goldsmith, Violet Jessup, Harold Bride, and Jack Thayer had little in common before April 15, 1912.  But after that they were joined in a lifelong bond, as survivors of the greatest maritime disaster ever.  The Voices are theirs (and others’).  Titanic buffs will find little here that’s new, but schoolchildren of today (who weren’t even born when the movie came out!)  should be riveted, especially with the recollections of Frankie, who was only nine years old at the time, or teenage Jack who saw one shipboard friend to a watery grave.

The book includes copious photographs, many of them taken by the young Irish priest Frank Brown, who sailed on the Titanic from her shipyard berth in Belfast to Southampton harbor, where she would complete her compliment of passengers before heading out to the open sea.  During his short voyage Fr. Frank snapped pictures incessantly–then got off at Southampton, thus preserving his own life along with a priceless set of photos from the actual voyage.  Other illustrations include diagrams, documents, and facsimiles, such as a dinner menu for the first-class dining hall.  The fifty-page appendix is similarly stuffed, with timeline, short bios of passengers, letters, lists, stats, and official reports.  The author also includes resources for eager researchers to find out more.

Oddly, the first-person recollections impose a sense of distance and reserve.  Most of the survivors recorded their memories later, and time (plus the narrative restraint of the day) dampens some of the drama.  But the value of Voices is not so much narrative thrills as historical method.  How do we know what we know about a ship that sank with two-thirds of its human cargo?  In fact, how do we know about any event that’s no longer in living memory?  This book shows how bits and pieces of the record come together in a unified narrative that tells a single story.  Voices from the Disaster is great for middle-graders; for younger kids who aren’t that much into history yet, Titanic Sinks! is a compelling read. 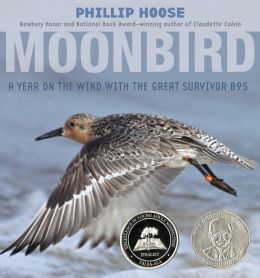 e of the world’s premier athletes.  Weighing a mere four ounces, he’s flown more than 325,000 miles in his life—the distance to the moon and halfway back.  He flies at mountaintop heights along ancient routes that lead him to his breeding ground and back.  But changes throughout his migration route are challenging this Superbird and threatening to wipe out his entire species of rufa red knot . . . will B95’s and rufa’s days of flight soon come to an end?

The rufa red knot is a robin-size shorebird with plumage that shades from brick-red in the warmer months to gray-white in winter.  What’s exceptional about this species is its migration pattern: from Tierra Del Fuego at the southernmost tip of South America, to Southampton Island in Hudson’s Bay, in the space of eight days.  They fly thousands of miles without stopping, their few rest stations along the way carefully chosen for refueling.  Horseshoe crabs are their ideal food–fat, plentiful, and quickly digested–but the birds have to arrive just after the crustaceans have laid their eggs in the sand, when “some crabs are so exhausted that they can’t make it back into the ocean.  They lie like hubcaps on the beach, some overturned, legs flailing, lance-like tails waving in the air.”  Dinnertime!

Timing is crucial: red knots have to catch the life rhythms of other species, stagger the journey stages to avoid competition with their own species, and arrive at their destination at the optimum time to nest, all the while dealing with the vagaries of weather and human encroachment.  B95, the individual tagged and observed by volunteer birdwatchers, has made this journey at least three times.

The story is dramatic enough, but additional tension comes from new industries and alterations that interfere with the birds’ established patterns.  I understand how someone who dedicates his life to studying a creature as fascinating as the rufa red knot despairs at the thought that these birds may soon be extinct.  It’s not so clear what we can do about it, however.  Humans should be respectful of all God’s creatures and live thoughtfully and appreciatively with them (if nothing else, because we have been given the capacity for thought and appreciation!).  All the same, many species will go extinct—and not all of them because of us.

But worry alternates with wonder, expressed in the recurring theme: How do they do it?  “The whole earth is full of your glory,” s 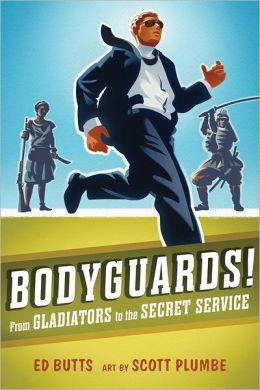 ing the cherubim in heaven (Isaiah 6:3).  Books like this don’t praise God, but they don’t need to.  The creatures themselves do that.

The author reveals–though not completely—the drama of a profession that goes out of its way not to attract attention.  Yet there have been bodyguards as long as there have been kings, tycoons, and crime lords.  In fact, the first recorded bodyguard in history served the Pharaoh, ca. 1570 B.C.  (The Pharaohs also used trained baboons.)  And did you know Billy the Kid was a bodyguard? And Leonidas and his 300 Spartans?  The material is arranged topically rather than chronologically, so there’s some skipping around that may be confusing, but a chronology in the appendix straightens it out.  After reading about bodyguards who succeeded and others who failed, and still others who turned on the people they were supposed to protect, a sixth-grader may want to consider the profession as a career choice.  That’s covered too, though some secrets can’t be shared.  Swift clear narration and lots of pictures (including a comic-panel page for every chapter) keep interest high.

For more nonfiction choices, and thoughts on why some readers (particularly boys) prefer nonfiction, go here and here.