The Mark of Athena (Heroes of Olympus 3) by Rick Riordan 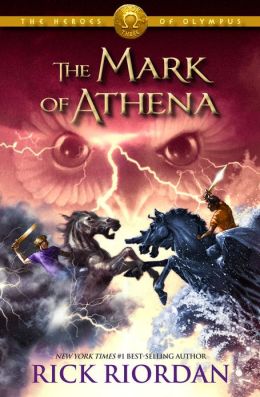 Bottom line: The Camp Half-Blood gang is back with the Heroes of Olympus series, but the Percy Jackson franchise may be getting a little tiresome.

After an excursion through Egyptian mythology with the Kane Chronicles, Riordan returns to his old stomping ground with Heroes of Olympus.  As the series title suggests, these are stories told by an ensemble, not a single protagonist–Percy Jackson doesn’t even show up in the first volume, The Lost Hero, because he’s the lost hero.  The Mark of Athena is the middle title of five.  Riordan includes enough information about the previous episodes (not too awkwardly) to bring a clueless reader up to speed, and if more information is needed, there’s always Wikipedia.

First impression: it’s long.  Like the Harry Potter series, every volume gets a little longer and the stakes a little higher.  The main premise of Heroes is that there’s a whole cohort of Roman demi-gods (teens with one divine parent) who occupy their own Camp Jupiter on the west coast and have no clue at first about their Greek counterparts at Camp Half-Blood in the east.  The big threat comes from Mother Earth—Gaea, who is gathering her monsters and giants to destroy all mortals and start over with a new regime.  Camps Half-Blood and Jupiter must combine forces to thwart her, but that can only happen if they settle an old conflict involving the statue of Athena stolen from the Parthenon a few thousand years ago.

So . . . when The Mark of Athena opens, seven Greek and Roman demi’s have formed a team to find the statue and thwart Gaea and unravel all the cryptic prophesies periodically spouted at them by mysterious old hags.  The Percy Jackson formula is soon in full gear: encounters with gods and other mythological characters, semi-comic villains and terrifying villains (who are sometimes the same), a journey with many side trips, and perilous, all-but-certain-death situations that make you wonder, How will they get out of this one?

The pluses of this series are irresistible page-turning, easily distinguishable characters (a good thing when there’s so many of them) and a variety of settings, such as the Deep South with echoes of the Civil War.  Nuggets of interesting information are strewn throughout the narrative, not just about mythology but also architecture, engineering, history, and language: did you know, for example, that the calens is the first day of the Roman month?  Noble themes like sacrifice and loyalty have their day, in which the demi’s always outshine their divine parents.  There’s also a truly spectacular conclusion, even though it takes too long to get there.  Philosophical or theological types might find some interesting thoughts raised by the demi-god conflict: i.e., living with both sides of their natures (human and divine), which has some relevance to the Christian life when you think about it. As most readers probably won’t.

As for the downside, I’m reminded of C. S. Lewis’s criticism of A Connecticut Yankee in King Arthur’s Court: the incessant wisecracking brings legendary heroes down to the level of Saturday Night Live.  Not that Aphrodite or Hercules deserves our admiration, but the old myths have endured through the ages because they contained some real element of glory and terror and transcendence.  Athena is also formulaic—the plot develops like a video game, where the player escapes one level of danger only to tangle with similar death-dealing fiends in the next.  And did I mention it was really long?  Still a fun read, with dashes of romance (Percy and AnnaBeth are now 16, so it’s inevitable) but no bad language or graphic violence.

See our review of the first Percy Jackson series, and House of Hades (#4 of the Heroes of Olympus series).