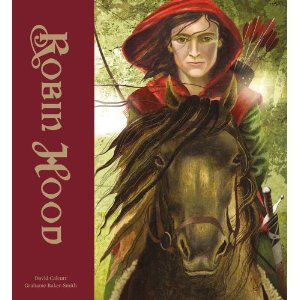 Everyone knows—or do they?–how the hooded stranger showed up at Nottingham Fair and challenged the Sheriff’s men to an archery contest.  He landed three arrows—whizz whizz whizz–in the black center of the target—according to some accounts, his second or third shot split the arrow that was already there!  Or remember about the day he met the huge fellow on a log bridge and sparred for the right-of-way until both of them landed in the river?  Or who could forget the image of the man in green carrying a fat friar across a lake—only to insist that the friar carry him back across?  Who was this mysterious hooded man?

I’m not sure how many kids today would know, in spite of dubious film updates every twenty years or so.  The author of this volume of Robin Hood hopes to remedy that, not with a casual retelling or updating but by combing through the hundreds of Robin Hood legends and getting as close to the 14th-century original as possible.  The introduction explains how the first stories appeared in ballad form, sung by wandering minstrels.  The appendix sheds light on the life and times, or at least the presumed life: longbows, outlaws, monks and friars, and more.  In between are nine tales, each accompanied by a ballad.

Interestingly, these stories locate Robin outside of the historical stream: no references to King John or Richard Lionheart, even though the old TV series and movies pictured Robin as something of a political rebel, righting wrongs until the rightful king appeared.  Apparently the oldest tales have no such historical underpinning, and they pull no punches as far as lawlessness and slaughter goes: the Merry Men do come to the aid of the downtrodden from time to time, but their main business is poaching and staying out of the Sheriff’s clutches.  It’s very uncertain that Robin Hood, or Robin of Lockesley, or any such person, ever lived, but the author can tell you where to find an unkempt grave in Kent (if I remember correctly) that might have been his.

The stories are well-told, but secondary to the physical beauty of this book: oversize (almost a foot square), with gorgeous full-color illustrations that combine acrylic figures with digital backgrounds.  Pages without pictures feature shimmering tracery and etching.  It’s the kind of book you want to buy, not just read.  There are longer and older versions of the Robin Hood legend out there, like Howard Pyle’s, but none prettier. (Though the N.C. Wyeth illustrations of the Pyle version win big points.)

“There are only two stories in the world: 1) a man goes on a journey, and 2) a stranger comes to town.”  Whoever said this originally—Dostoyevsky, maybe?—countless writing instructors have said it since.  Where the Mountain Meets the Moon, the author’s first novel and 2010 Newbery honor winner, is an example of the first kind of story: young Minli travels from her destitute village to the distant Mountains in order learn the secret of happiness and prosperity from the Man in the Moon.  Along her journey Minli gains insight through story-telling, particularly stories that mine the riches of Chinese folklore.

Starry River of the Sky is a companion volume, including some of the same characters and a similar format.  But in this one, a stranger comes to town.  Renli is a stowaway who comes to the end of the road in a nondescript village at the Inn of Master Chao.  He has no money to pay his way further, so he’s stuck, doing chores to earn his keep, until another traveling merchant or pilgrim passes through who’s willing to give him a lift.  Soon Madame Chang arrives, but she’s not passing through; instead she takes up residence at the inn.  Renli hates this stupid village and dull people, and he can’t understand why the moon never shows and the rain never falls.  Another oddity gets on his nerves even more: when night falls, where does the incessant moaning and crying come from, and why can no one else hear it?  Over time all will be revealed, especially through the story-telling challenge between Renli and Madame Chang.

In her afterward the author recalls how, as a child, she resisted her Chinese parents efforts to pass on their heritage.  As an adult she regretted not taking advantage of the opportunities they offered her.  Numerous visits to Hong Kong, Taiwan and the mainland have re-acquainted her with Chinese folklore, which heavily influence the novels, even though the stories are original.  Starry River doesn’t have quite have the charm and freshness of the previous book, but it’s worthwhile to see Renli move from resentfulness to appreciation.  The journey was worthwhile, but by the end it’s time for this stranger to go home with forgiveness in his heart.

Speaking of folklore, Emily looks at the Anasi stories here and here.  Or check out her interview with Roger Lowther on Japanese literature.