Secret Thoughts of an Unlikely Convert: A Review of Rosaria Butterfield’s Book 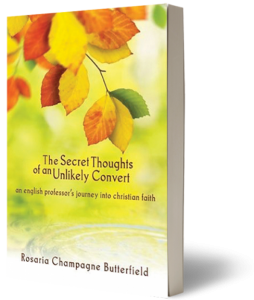 The Secret Thoughts of an Unlikely Convert

In the 1990’s, Rosaria Butterfield was a feminist English professor working on a hit piece aimed at conservative Christians when she reached out to Ken Smith.  Ken was the pastor in a Reformed Presbyterian church in Syracuse, and as it turned out, he was eager to share with her far more than she expected.  As a lesbian who defined her identity and arranged her professional and social life around a feminist worldview, Butterfield had many preconceived ideas about what Ken and his wife would be like.  But when they not only found time to discuss her ideas, but invited her to dinner numerous times, and offered to give a presentation to her class, and eventually invited her to their church, she was confronted with an anomaly.  Here was someone who didn’t fit her grid.  Someone who defended what she thought was indefensible–a belief in the Bible and (what seemed to her) oppressive, patriarchal nonsense–and yet showed her love and kindness she had never seen before.

In The Secret Thoughts of an Unlikely Convert, Butterfield has opened the door just a little on what it was like for her to encounter the gospel and have her world thrown into “comprehensive chaos.”  After conversion she writes of how her world was turned upside down:

I started to obey God in my heart one step at a time.  I broke up with my girlfriend.  My heart wasn’t really in the break-up, but I hoped that God would regard my obedience even in its double-mindedness.  I started to go to the RP church fully, in my heart, for the whole purpose of worshiping God.  I stopped caring if I looked like a freak there.  I started to accept the friendship that the church members offered me.  I learned that we must obey in faith before we feel better or different.  At this time, though, obeying in faith, to me, felt like throwing myself off a cliff…and then came the night terrors.  Night after night, dreams so vivid and real that I could taste and feel them.  Dreams so commanding that when I awoke I felt filthy and delirious.

A lot of the pain of Butterfield’s first months as a Christian came from being rejected by her former friends and professional colleagues.  Butterfield knew that in gaining Christ, she would lose her lesbian partner, her place in the LGBT community, as well as her livelihood as a faculty member of Syracuse University.   We are constantly reminded in the media about the courage of those who make the opposite journey, out of conservative circles and into the LGBT community.  I expect that someone like Jodie Foster or this young man did have to muster courage to potentially offend fans, family, and friends.  But Butterfield’s journey was just as tumultuous and heart-wrenching.  And she certainly won’t get any rave review in Publisher’s Weekly or praise from ABC News.

In fact, one of the reasons Butterfield’s book is so instructive for Christians who’ve never faced her particular temptations is that it shows just how much non-Christians in academia–especially the arts–have to lose.  Publicly, it may seem be a simple thing for an accountant to turn to Jesus.  But Butterfield’s own estimation of conversion was that when it came to her old life, she lost “everything but the dog.”

So often, especially concerning sex, Christians talk as if we are asking people to nip a little here, tuck a little there.  But to follow Christ is to die.  To be fair, Christ gives us back a new life, an eternal life that can’t be compared to what we lost.  But having borne two children in the last six years, I can tell you, birth is messy, and painful, and the best sound you can hope to hear in your newborn is a loud, terrified cry.  New birth in Christ is no less terrifying and miraculous.

And of course, that’s only the beginning.  To follow Christ requires a continual dying to self–putting to death the old lusts and selfish desires, and a putting on of Christ and His priorities.  And even if its not some sexual battle you’re fighting, every Christian who is truly following Christ will daily struggle with the desire to put self before God in some way.  Butterfield sums up that process in her life, specifically in respect to sex, thusly:

What good Christians don’t realize is that sexual sin is not recreational sin gone overboard.  Sexual sin is predatory.  It won’t be “healed” by redeeming the context or the genders.  Sexual sin must simply be killed.  What is left of your sexuality after this annihilation is up to God.  But healing to the sexual sinner, is death: nothing more and nothing less. (Butterfield, 83)

The interesting thing is that while Butterfield dealt with same-sex attraction in her own life, she is quick to point out that it is no different than other kinds of sexual sin, from kids messing around in dorm rooms to women reading 50 Shades (see our 50 Shades coverage here) on their ereaders:

This book is never graphic in its description of Butterfield’s former life.  I would trust it on that point to any Christian.  But there are issues I would disagree with her on.  For instance, I’m not convinced that Christians should only sing the Psalms in church.   And in all her honesty, Butterfield may not be fully disabused of her former prejudices about Christians.  After her conversion, for instance, she talks about driving through a neighborhood with Bible verse placards in the yards; this alone made her wonder whether these people would speak to her if they knew her former lifestyle.  In my experience, Christians vary widely in their ability to deal with those who aren’t like them.  Certainly there would be no reason to suspect everyone in a neighborhood, simply because they have different social norms than she’s used to, are closed-minded.

But these kinds of issues are small peanuts, and overall, this is a stunning book because the Holy Spirit has done a stunning work in this woman’s life.

It is worth pointing out that by the end, Butterfield has found a kind of healing.  She is by all accounts happily married and mother to four children by adoption, spending her days homeschooling in the classical tradition and otherwise caring for the foster children who come her way.  Her life, once used to persecute those who did not believe her feminist ideology (see page 87 and her desire to expose the Christian right), is now filled with service to the least among us. It is a powerful testimony, and one that I hope many, many young people struggling with sexual sin will be inspired by.  I would also highly recommend it to young men and women who intend to study literature or the arts in a secular college.  It would be a great introduction to the people and ideological challenges they will likely meet there.

For more of our articles on LGBT themes, see Janie’s review of YA books Identity and Revolution, her look at the links between Roe v. Wade and Judy Blume’s Forever.  Plus, until Monday, January 28th at noon, you can still enter to win a copy of the book, as well as other wonderful resources on the subject.