Every year advent takes me by surprise–otherwise I would have posted this last week!   Family advent readers come down from the shelves this time of year, and many of them are good for more than one go-round.  As the children grow up, it’s good to look around for new advent books to suit their growing comprehension–but never at the expense of the little ones.  Today, a new book (or a little over a year old) and some old standbys.  Or, for something you can download right now and begin this Sunday, Desiring God ministries has their annual advent reader available for free on the website, here. 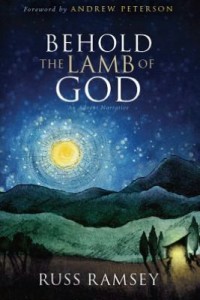 Every story God tells is filled with glory.  Like Abraham beneath the stars, I want to see it.  I want to be captured by the wonder of impossible promises coming true.  I want to read the pages of Scripture with my eyes open to the beauty of mercy and grace.  I pray this for you as well.

It looks like an advent reader, but as the author explains, “this book is not exclusively a Christmas book.”  Just because it consists of 25 readings doesn’t mean it should be saved for December.  Every day we live God’s great story, and any month can serve as a time-canvas to paint it on.  But still—Christmas is coming, and here’s a new way to get ready.

Day 1 looks at John the Baptist: really looks, at the man’s rough clothes and wild hair and dripping water as he stands waist-deep in the Jordan.  It’s an ordinary day of proclaiming and baptizing, so far as we know, when he looks up and see the One approaching.  “I didn’t know him,” he would testify later.  “But the Spirit told me that this was the One.  Behold, the Lamb of God . . .”

We leave him there, the Lamb of God, standing on the riverbank and waiting quietly to be baptized.  Day 2 takes us back to a new nation gathered around a mountain to hear the word of their God, not yet knowing what kind of God he is.  Is he something like Isis or Osiris , only more powerful (and on their side)?  Not at all—what God proclaims at Sinai is in essence the same thing he would proclaim in Bethlehem: I have set my love upon you.  “This was the heart of Israel’s religion: love.  Only divine love made sense of the world.”  Day 3 goes back still farther, to the beginning of everything and the spoil of everything . . . and then we begin working forward again, through patriarchs and kings and prophets, finally arriving (day 21) at a stable in Bethlehem.

Baby Jesus comes wrapped in history and promise, as tight as the swaddling bands around him.  The world likes to see him as an anomaly, a one-off, saved for this “special time of year.”  Even we, his followers are slow of heart at times (Luke 24:25) to see him in context; but if we listen, we hear the echoes.  Behold the Lamb of God picks up the echoes through the millennia, reminding us how God’s purposes unfold and overlap.  It’s a good read-aloud, but not so much for younger kids; though Pastor Ramsey has a flair for the dramatic detail, he’s not just telling stories but reflecting on what they mean, at a depth that fourth and fifth-graders (for example) may not be able to go.  And there aren’t any pictures!  But for a teen devotion, a college/high school discussion group, or couple study, it’s well worthwhile.  And, oh yes–it pairs admirably with Andrew Peterson’s CD of the same title. 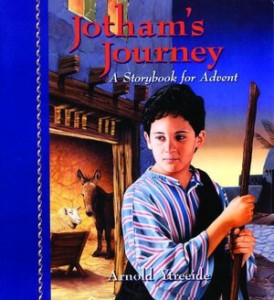 These three books, originally published by Servant Publications, were out of print for a few years, but popular demand has brought them a new publisher and new editions.    All subtitled A Family Story for Advent, they place fictional central characters in the biblical narrative with a strong storyline, each chapter followed by a brief meditation and/or scripture passage.  The author recommends a traditional wreath with five candles; every day, starting four Sundays away from Christmas, the family reads a chapter and lights one or more candles until Christmas day.

Jotham’s story overlaps with Tabitha’s and Bartholomew’s, as well as other recurring characters that young listeners will enjoy recognizing as they appear.  Their adventures contain echoes–all three are sold as slaves (or almost) and escape the snares of the central villain–who finally, and rather unconvincingly, expires.  But their paths also diverge and form trajectories and intersections with characters we recognize from the Bible: an old man named Simeon, an elderly couple with a brand-new baby named John, and a young Roman officer named Cornelius.   Along the way we learn about Essene communities, temple worship and features of everyday life in Bible times.

Jotham’s story begins with a peevish act of rebellion that is paired with passages from Isaish detailing Israel’s rebellion against God.  It’s a very strong, effective beginning that illuminates  biblical truth with fiction.  The other two books have less scripture, and the meditations at the end of each chapter are more in the form of life lessons–still good, but not as Bible-based.  Moms and Dads may want to temper or bypass some of the statements, such as “Jesus came to earth exactly for the purpose of letting us know that every one of us is equally loved by God.”  I’m not sure I would put it quite like that–he came for the purpose of making us right with God, and does God love unbelievers as equally as believers?  Some small anachronisms get in the way of the mood–as least for me–and Tabitha’s story contains far too much equal-rights talk.  (Girls are as good as boys!  Yes.  We know.)

Still this is a great idea with a lot of promise, and the stories will keep kids on the edge of their seats.