Just Because: a Roundup of New Picture Books 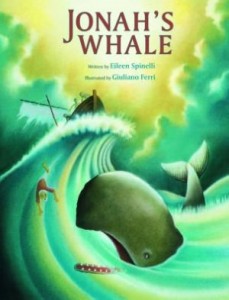 The picture book is alive and well, to judge by the way the publishing industry keeps pumping them out.  Here are some of the more recent (and one more that’s not so recent) offerings, all recommended:

“God made Whale.  God gave Whale a home in the blue-deep waters of the sea.”  Beyond existence and a home, God supplies Whale with a family, food, a song to sing, and a great, tall, strong tail for slapping the water and “soaking fishermen and their lunches.”  Who wouldn’t want to be a whale?  But God has a job for this carefree creature: during a storm, God says, “Save the man Jonah.”  Do all God’s creatures do his will?  This one does.  He opens his mouth; down goes Jonah.  But for how long?  Three days is a long time to swim with a man in your belly.  When the word finally comes to spit the man out, what a relief!  For both!  The format is large, with bright colors and evocative views of the vast and varied ocean.  Count how many colors you see in the water beside blue.  Yes, we know the Bible says it was a great fish, not a whale, that swallowed Jonah, but that won’t detract from a child’s enjoyment, or an adult’s either.  As a nice additional flourish, the illustrator dedicates this book “to the baby that my wife carries in her belly, as the whale carried Jonah.” 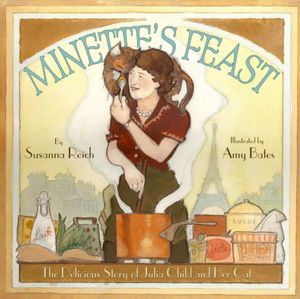 “Minette Mimosa McWilliams Child was a very lucky cat.  Perhaps the luckiest cat in all of Paris.”  That’s an understatement: Minette was adopted by an American couple who had taken up residence in her neighborhood and were very interested in food.  So, as it happens, was Minette—“Like any self-respecting French cat, Minette wouldn’t dream of eating food out of a can.”  She preferred to catch her meals, even after Julia, her adopted mom, decided to learn to cook.  Julia had a knack for cooking, and Minette occasionally nibbled. “But of course, mouse and bird were much preferred.”  The story of how this enthusiastic carnivore was won over to haute cuisine is rather thin, even though her joy over a perfectly cooked bird is a feast of verbs: “She jumped and rolled, curled and stretched, raced and ran, gurgled and purred.”  What it lacks in plot it makes up in atmosphere, lilting language and lots of French (with a pronunciation guide).  For her own part, Minette won Julia over to the joys of cat-keeping.  All quotes are taken from books and letters by Julia and Paul Child—Lovely!  And yummy!

Z Is for Moose, by Kelly Bingham, illustrated by Paul Zelinsky.  Greenwillow, 2012, 32 pages. 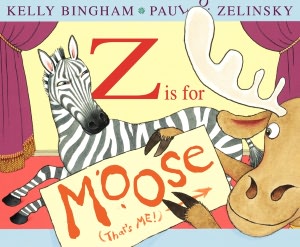 Lots of alphabet books out there, but this one—Wait a minute!  “Z is moose”?!

It’s show time, and Zebra is lining up all his principal players backstage.  Here they go, one by one: Apple, Ball, Cat, and Duck . . . but what is Moose doing on the D page?  Okay, so he’s a little confused.  And he could use some coaching on alphabetical order because for H, J, and K he’s continually barging in from all sides, asking “Now?” “Is it my turn yet?”  But when we turn the page on Lollipop, a dreadful surprise!  After that, there’s no fury like a Moose scorned, and Zebra may just live to regret a certain casting decision.  Or maybe not.  Kid will love Moose’s emotional roller-coaster through the rest of the alphabet, and when they come to the end, they can find the whole cast on the last page.  Help them find their ABC’s, and then read it again. 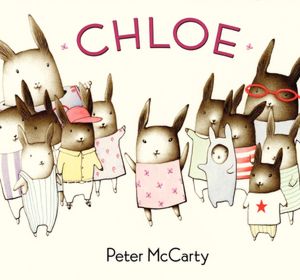 Chloe doesn’t mind being a middle child—or a middle bunny, rather, with ten older bunny sibs and ten younger.  Her favorite time of day is when Dad comes home and the whole bunch is together for family fun time.  But one night he brings home a surprise: a brand-new TV (with a round screen—we’re in the Hopalong Cassidy era).  After dinner, guess what happens?  “This is the worst family fun time EVER!” Chloe protests, but everyone else, except baby Bridget, wants to watch a pound cake attacking a city on the screen.  Somebody has got to take a stand—how can Chloe get her real family fun time back?  Like Henry in Love, a previous book featuring Chloe, the bunnies are blocky and rabbity, with velvety fur and gleaming eyes.  Little readers will have plenty to chances to count them and make sure they’re all accounted for.  See what you can tell about their individual personalities.  It’s real family fun! 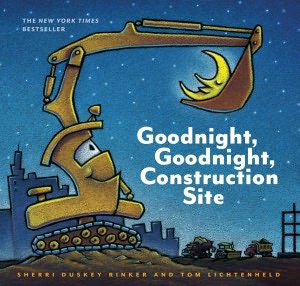 This one isn’t as new, and as one of the top-selling picture books of the last year it isn’t obscure either.  But it’s worth a mention if you haven’t seen it or you’re looking for gift ideas for a baby boy.  Most nighty-night books feature cuddly animals or toys, but the characters we’re tucking in bed within these pages are tractors and trucks.  If your squirmy little boy is bored with Goodnight Moon, try this for size: all day long these big tough guys have been shifting beams and digging dirt; now it’s time to settle in.  One by one, Crane Truck, Cement Mixer, Dump Truck, Bulldozer and Excavator finish up their chores in the blaze of the setting sun, then go through their individual bedtime routines, close their eyes and “dream of busy days ahead.”  Some of the rhymes fall a little flat (“He moves the dirt/from place to place,/then dumps it with/a happy face”), but by the end, all sleepy little dump truck drivers should be nodding to the iambic rhythm:

Turn off your engines, stop your tracks,

Relax your Wheels, your stacks and backs.

No more huffing and puffing, team;

It’s time to rest your heads and dream.

For recommended picture books from last year, go here.  Or see our reviews of the 2012 ALA Caldecott Award winners.  Or, a little further back, some picture books with religious themes and all-American tall tales.