Rocket Reads and Writes; Charlie Joe Does NOT

In keeping with our back-to-school focus: if you haven’t met little Rocket, you really should.  As for Charlie Joe, well . . . 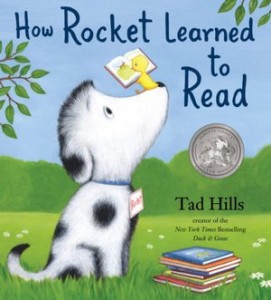 Rocket is a loveable gray-and-white crewcut mutt who enjoys his doggy life—mostly chasing leaves and chewing sticks.  He doesn’t realize how limited it is until a little yellow bird (called the little yellow bird) opens a class on a perch above his head.  At first he’s not interested in anything she has to teach, but when she starts reading a story out loud, his mind is awakened to the magic of imagination, character, and plot.  The clever bird stops at a cliffhanger, insuring that Rocket will come back the next day.  And the next, and the next, until he has learned every letter of the “wondrous, mighty, gorgeous alphabet” and can spell and sound out words with just a little help from his teacher.

“With a G and many Rs they spelled Mr. Barker’s growl: GRRRR!  They spelled the sound of the wind, which was growing colder by the day: WHHOOSSSHHHHH!”  When the days grow short, the little yellow bird flies south with a promise and a reminder: “Don’t forget! Words are built one letter at a time.”  Rocket doesn’t forget.  Throughout the winter he spells words (beginning readers will enjoy figuring them out), all related to his doggy life and the splendor of ordinary days.  “When Rocket spelled M-U-D, he knew that spring, as it always does, had returned.”

But this spring is different; he’s a different dog who has learned to think about his life instead of just living it, and it’s all because of the gift of language.  I don’t know if children in the suggested age range will grasp that concept, but some may wonder if there are any real dogs who ever learned to read, and if not, why not.  Most kids, I hope, will see their own excitement at learning to read reflected in an eager gray-and-white puppy, and Rocket’s joy should be contagious. 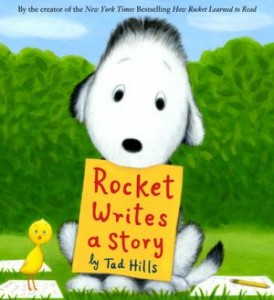 Rocket has not outgrown his enthusiasm about reading: “When he opened a new book, it smelled like a place he’d never been to, like a friend he’s never met.”  He’s also continually sniffing out words.  Words are everywhere—so many of them, he gets an amazing idea—why not write a story?! The little yellow bird suggests he collect his words on a nearby bush, and adds a few of her own, mostly prepositions (“These are small, but I promise they’ll come in handy”).  Rocket tells all his friends, and on story-writing day he trots eagerly to the class under the tree and picks up a pencil.

But there’s something about a sheet of perfectly white paper.  “He looked down at the blank page and the blank page looked up at him.  But no story would come.”  Finally, “At snack time, Rocket gave up.”  I sympathize with him, having spent agonizing mornings tapping a pencil and taking an obsessive interest in straightening up my desk.  To a second or third-grader in the same situation, the problem seems insurmountable, but Rocket’s teacher pulls out the oldest advice in the book: Write what you know.  Might it be something you’ve seen?  Something that happened to you?  Something that inspires you?

Rocket’s search for inspiration leads him to a tall pine tree that smells nice: “Very inspiring.”  And better, there’s a nest way up in the tree.  And even better, there’s an owl in the nest.  This new discovery, plus inspiration, plus a bush full of words and leading questions from his teacher, turn out to be all he needs to write a story—and make a new friend.

It took me a long time to figure out the write-what-you-know principle, but here’s an opportunity for fledgling writers to grasp it early.  You could say a little yellow bird told them. 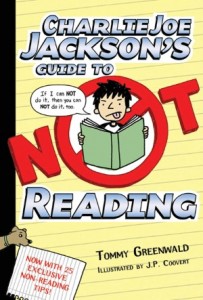 I kept thinking this book was going to turn the tables at the end, as Charlie Joe discovers he loves reading.  But nope. Some kids just don’t, and that’s that.  The story, told in the heavily-illustrated, anti-heroic Wimpy-kid style, recounts CJ’s various dodges to avoid reading until his secret weapon, his reading friend Jack who supplies all his book-review material, discovers good reasons not to do so.  Now CJ must come up with a master plan to achieve his goal of never reading a book.

The plan hinges too much on middle-school romantic intrigue for my taste, and CJ’s voice is improbably knowing, with a suspiciously good vocabulary for someone who doesn’t read: “What does Hannah Spivers have to do with this book? What does the most perfect creature that God and/or the universe ever created have to do with telling people how not to read?”  Glad you asked–or if you didn’t, he’ll tell you anyway.  In the end, CJ doesn’t get away with his scheme—cheaters never prosper!—and his penalty (spoiler alert) is either to read ten books over the summer or to write one.  He chooses the latter—the very volume the reader is holding in his hands.

In my opinion, bad readers make bad writers, so I don’t buy the central premise.  I don’t necessarily recommend this book, either.  But I feel a grudging admiration for the sneaky trick: that a few recalcitrant non-readers out there will stick with it all the way to the last page, just to make sure that Charlie Joe hasn’t turned on them–even though they had to read his book.