The Hero’s Journey: A Teaching Tool

On Tuesday,> Janie talked about the Higgs boson, and the search for what’s under the surface in physics.  Today, I’ve invited Nathan Huffstutler, a writing and literature teacher at Maranatha Baptist Bible College, to lead us on a similar search in literature.  And I’m so excited to share his thoughts with you guys.

The basic idea is that many stories share the same structure, and one particular structure is The Hero’s Journey.  One quick caution about the guy who developed this theory, Joseph Campbell.  I am no Campbell scholar, but just reading over his book list, it seems he mixed his Christian roots with the popular liberal ideas that all religions are really the same–as if the stories of Christ making this kind of hero’s journey were no different from ones about Buddha.  But of course, this doesn’t take into account that Christ was holy and could make atonement for sinners, while Budda wasn’t holy and therefore couldn’t.  (It’s really a question of typology, which I’ve discussed at length in my Christ in Literature series.  For a short summary, though, just remember that Created things point to God, and created heroes like Frodo Baggins aren’t just similar to Christ, but point to us to Him.)

The Hero’s Journey: A Tool to Get Developing Readers Under the Surface

As a college literature teacher, I sometimes have students in my classes who are there simply because they are getting their literature requirement “out of the way” (as they put it). But because I believe that a lifelong love of good literature is worthwhile, one of my goals is to help these students start to enjoy what they read in my classes. I want them to enjoy the practice of reading, and to be able to get under the surface of stories they encounter.

Many secondary teachers and home school parents feel the same way I do. They search for ways to get young people interested in stories and to help them see how the stories work so that they can understand the story on a deeper level—and enjoy it more. 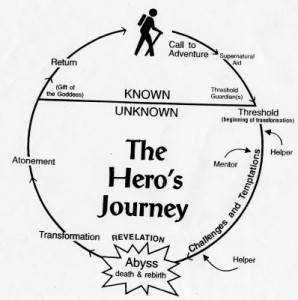 Hero’s Journey. This formula was articulated by Joseph Campbell, an American mythologist and writer who noticed certain patterns among myths and legends throughout the world. Campbell’s book The Hero with a Thousand Faces was based on his findings. In the late 1970’s, a screenwriter named Christopher Vogler took Campbell’s formula and condensed it into a twelve-step formula that became influential among screenwriters. I use Vogler’s condensed formula in my classes. (See here for more.)


When I have introduced this formula to my students, I’ve found that they connect with it immediately. Even students who previously showed little interest in literature start to open up, making connections to not just novels, but also narrative poetry (such as Beowulf), film, and even Biblical narrative.

Here’s a summary of the Hero’s Journey (in Vogler’s condensed form). I should note that you probably won’t find the steps exactly in this order in every story—but you will probably find a similar variation.

I. Separation from the Ordinary World

In the first stage of the story, the hero leaves his ordinary life in order to go on a journey or gain some sort of experience.

II. Descent into the Special World

In this stage, the hero is confronted with tests and battles that try his courage and perseverance.

III. Return to the Ordinary World

In this stage, the hero returns to a normal existence once again, having gained something positive from his experience.

The Development of the Hero Through the Journey

As I introduce this story structure, most of my students immediately make connections to books they’ve read and movies they’ve seen. But then I shift the focus from the story structure to the development of the main character. We look at how the character changes through the Hero’s Journey.

As we discuss the hero’s development, we see that the hero’s fundamental problem at the beginning of the story is his unwillingness to become committed to a cause that is bigger than himself. The hero refuses to change at first. But as he receives counsel from a mentor, and as his conscience prods him to do what is right, he starts to change his values and grow in nobility. By the end of the story, the main character has risked his life to do something good—and can truly be called a hero. He has become a different person, someone who is willing to die for something that is more important than self, and someone that the students can see, at least in some ways, as virtuous.

Here’s a worksheet that I’ve used to get students familiar with using the Hero’s Journey to analyze a story. In the chart I show how Bilbo (in J. R. R. Tolkien’s The Hobbit) and Moses (in the Exodus story) both become less self-centered and more self-sacrificial through their journeys. As the students work through the worksheet, they can also take a favorite story of their own and see how it fits into the Hero’s Journey structure.

So, what do you guys think?  Does this seem familiar?  Thanks so much to Nathan for bringing this to us!