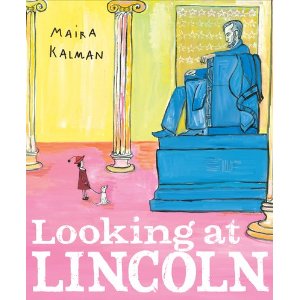 Let’s go ahead and admit it.  Nobody really cares about Presidents’ Day.  I mean, maybe a few history buffs, but does anybody ever make a Lincoln-shaped cake?  Ever seen Washington-head Oreos or Little Obama Debbie Cakes on the junk food isle in the grocery store?  If I had any doubt, there is one more holiday litmus test that never fails: the drunk driver coefficient.  If we really loved the Presidents, our Drunk Driver population would come out en masse to celebrate.  No, we don’t love the Presidents.  And it’s a shame, too, when they are so fascinating!  (Much more interesting than clovers and green beer, I’d say.  But then my nerd coefficient is pretty high.)

So, today RR intern Jack Mertens and I picked a couple of resources supposed to help you and your kids up the happy part of Happy Presidents’ Day.  We’ll tell you what works and what doesn’t in these three kids’ books about our lovely dead Presidents.

This book actually began as an post in the online Opinion Pages of the New York Times.  You can read it here.  Older kids who wouldn’t be led astray by the random and brief inclusion of some painter’s struggle with her sexuality would probably enjoy it.  In the spirit of frankness I’ve already begun, this isn’t great history.  It’s more about what kind of food Abraham Lincoln liked to eat and what kind of hat he wore than serious history.  But at times, it’s really funny: in speaking about his relationship with his wife, Kalman writes in the adult version,

Did he have nicknames for her?  Little Dumpling?  Plumpy?  What did she call him?  Linky?  Pokey?  Maybe not.

And the book touches on a lot of important things, without leaving a very tactile and simple presentation that kids will find fascinating.

Unfortunately, occasionally those important things, like why the North fought the Civil War, can be over-simplified and not quite represented fairly: ““[t]he Northern states believed that slavery should be abolished. And so they went to war.”  Er, there was that little issue of state’s rights, too, as well as economic pressures….But on the whole, the presentation simple enough and personal enough not to wander too far into the wilderness.

What will be obvious once you take a look inside, though, is that it’s the pictures that make this story pop: simple objects made brilliant by color and perspective and context.  I’m fascinated by the blend of storytelling, art, and journalism here, and I’m very happy to see someone make such creative use of the blogosphere.  I’m also really happy to see that Kalman didn’t stop at creating a kind of ebook, but went one step further to create ye Olde School Picture Book.  Maybe there is a future for them yet.

As some of you know, Jack Mertens was chosen as one of our interns last November.  He’s an eleventh grader from Louisiana, and highly talented in both computer/tech skills and creative endeavors.  You can read about some of them at his blog, Mertens Creations; you can also read his and his brother’s comic reviews at Flint and Bone’s Comic Reviews.

While Jack has already done a lot behind the scenes, today I was happy to invite him to review a couple of President’s Day books for us.  Here’s what he had to say!

George Washington: The Life of an American Patriot 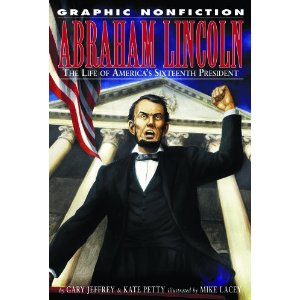 Looking for a good way to celebrate Presidents’ Day? Why not celebrate it by learning about a few famous presidents? A Wikipedia article about George Washington or Abraham Lincoln might do the trick, or even a simple slideshow of the presidents.

A book about the presidents is also a good option. Today I am going to review two graphic novels for middle readers, one about George Washington and one about Abraham Lincoln. Part of a series published by Rosen Central (which I found at the library), these “graphic nonfiction” books serve as solid introductions to the lives and times of two very important U.S. presidents.

George Washington was born on February 22, 1732, in Virginia, where he grew up and went to school. He worked as surveyor for a few years, but then he became a soldier, serving with distinction in the French and Indian Wars. In one engagement, enemy infantry shot two horses out from under Washington and sent four bullets whizzing through his coat. Surprisingly, none of these bullets touched Washington. With leadership experience gained from these wars, Washington became the ideal leader for the Americans in the Revolutionary War.

Abraham Lincoln, second perhaps to Washington, remains one of the best-remembered U.S. presidents in history. He was born on February 12, 1809, in Kentucky. He grew up to be a tall (6 feet 4 inches) man who worked as a shop-owner, then as a lawyer, and finally as a politician. He became President of the United States during an extremely turbulent time in American history, and he weathered the Civil War for all of his first term as President. Shortly after Lincoln’s reelection, an assassin shot Abraham Lincoln in the head, and Lincoln died on April 15, 1865—only 6 days after the end of the Civil War.

These two “graphic nonfiction” books are both relatively short—only 48 pages long. Since the purpose of these books is to give the reader facts, they both rely heavily on narration. Abraham Lincoln includes actual quotes from Lincoln’s speeches—most famously his Gettysburg Address.

Comic books can sometimes be more desirable than regular books for two reasons:

Until then, nonfiction comic books will just have to fit their first job as primers for beginning readers. These books, while hardly great literature, still work as solid introductions to the lives and times of two very important Americans: George Washington and Abraham Lincoln. Middle readers, comic book readers, and even the mildly curious should give these books a look.

Thanks Jack!  Let us know when you find that perfect blend of worldview and artistry!  How about our readers?  Anybody know of a Presidents’ Day book worth making Little Debbie Cakes about?

For a great book on George Washington, see our review on Lynne Cheney’s When Washington Crossed the Delaware.  And for the best book I know of for older kids about the founding of our nation, see a review of Never Before in History.