Two graphic novels give readers a glimpse of life and culture in Africa and South America.  Ages 7-12 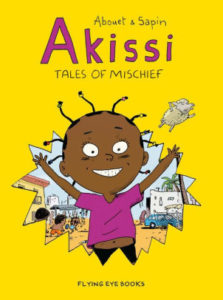 Akissi lives with her big brother Fofana, her teenage sister Victorinne, her mom and dad and countless aunts and uncles in a village in Ivory Coast.  As the subtitle suggests, little sis is always getting into trouble, such as a hiding a pet mouse in her bed, drinking the communion wine, or peeing in her brother’s bed so he gets blamed for it, or setting her cousins’s hair on fire.  Though billed as a light-hearted slice-o-life from West Africa (based on some of the author’s childhood memories), some of these stories won’t strike readers as funny—like the time Akissi, as a result of eating food off the floor, has tapeworms coming out of more than one body orifice.  Or the time she is bitten by a huge snake and rushed to the village clinic on her auntie’s back.

While some of the incidents are a bit jarring, most kids will relate to the childish pranks and family dynamics that seem common the world over.  Whatever their judgment (or yours) of Akissi’s behavior, they’ll gain a broader sense of how much of the world lives.  For ages 7-12

Cautions: Disturbing images (like the worm coming out of Akissi’s nose), Language (1-2 misuses of God’s name) 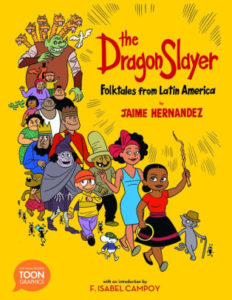 In the title story, a farmer’s beautiful daughter is framed by her two older sisters, leading their father to accuse her of stealing and send her away.  Her kindness to a beggar woman earns her the gift of a magic wand, which gives her the answer to any question.  This turns out to be a very handy implement when she must vanquish a 7-headed dragon (and marry a prince).  In the story of Perez the Mouse, Lovely Marina Martinez turns down three four-legged suitors before settling on the dashing Perez—but what to do when he falls in the soup?  Finally, Tup is the smallest and laziest of three brothers, but cleverness makes up for that when he get a colony of aunts to do his work for him.

These three tales illustrate the universality of traditional stories: the heroic, the fanciful, and the ironic.  In Latin America native cultures influenced the European invasion much more than in Canada and the USA, but a close listener can hear echoes of the brothers Grimm and Scheherazade.  Or if not, sunny graphics and bold colors make this a treat for young readers of any nationality or ethnic group.  For ages 7-10