Back to School with Babymouse and Og the Frog

Two back-to-school series for different ages tickle the funny bone, satirize social conventions, and even stimulate sympathy for others.  Ages 6-12 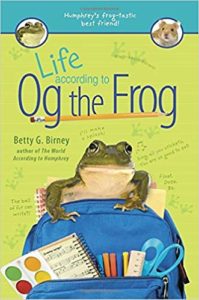 Og was enjoying life in the marsh (Think. Float. Doze. Be.) when he was rudely kidnapped.  Now he’s in a classroom with a bunch of big tads and a squeaky, annoying mammal in the cage next door.  An obliging sort, Og can always amuse himself making up songs and rhymes, but why is he here?  As the days pass in Mrs. Brisbane’s third-grade class, he begins to make sense of things while picking up the stories, fears, and personalities of the characters around him—even the furry one.  Then he has an opportunity to return to the swamp.  Should he take it, or does he have a new home now?

In the “According to Humphrey” series, which began in 2005 and is now up to nine volumes, a loveable little hamster learned to read, write and shoot rubber bands in Room 28.  Having achieved this pinnacle, Humphrey yields the floor to another four-legged classroom pet, who doesn’t yet understand him but is getting there.  Newly independent readers will enjoy watching this mammal/amphibian relationship develop, as well as the gentle humor and varied personalities of Room 28. 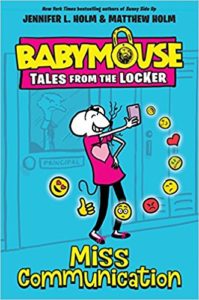 Middle school is impossible without a smart phone—doesn’t everybody know that??  Babymouse’s parents could stand to get a clue.  Shut out of normal life by titillating texters, she finally talks the ‘rents into buying a Whiz Bang mini—her ticket to social success and pumpkin peppermint lattes at the Coffee Shoppe!  But it’s not enough to have a phone: now you have to follow friends so they’ll follow you, and post a killer profile picture, and brush up on your emojis, and how, oh how, does one go viral?

Babymouse, the loveable, overeager comic creation of a Newberry author and her pesky little brother, is now in middle school with a brand-new series.  All her friends from the original series have come along, and Babymouse herself has grown into the earnest, un-ironic version of Greg Heffley, complete with comic misunderstandings and screw-ups.  But also, at least occasionally, lessons learned: “Even though all those fancy apps were designed to make me feel more connected, they actually made me feel pretty LONELY.”  So she turns off her phone for the first time ever—and forgets to set her alarm clock.  Kids who are feeling middle-grade stress can unwind by spending time with her.