Newbery Buzz #4: One Last Word and I’m Just No Good at Rhyming

Betsy, Megan, and Janie continue our Newbery Buzz discussions with One Last Word and I’m Just No Good At Rhyming, poetry books that are quite different from one another.

Poetry and tea were meant to go together, even before “Poetry Teatime” was an official “thing” for the homeschool world. Back in the day, Megan and I called Poetry + Tea a “poe-tea,” and we sponsored a contest right here on Redeemed Reader for children’s poetry. We are also both mothers to multiple boys who love poetry just as much as we do (and one daughter is also a poetry fan). Janie is also mom to a (grown-up) boy and (grown-up) daughter. We’re here to attest that boys can enjoy poetry—anyone can enjoy poetry. And the books we’re discussing today just might be the hook you need to introduce poetry to your family.

It seems natural, then, that we might be championing poetry books as possible Newbery contenders: One Last Word and I’m Just No Good At Rhyming. As a longshot, we might even discuss The Watcher as a possible contender; after all, Last Stop on Market Street was a Newbery winner!

Betsy: Has a book of poetry ever won the award before, Megan? 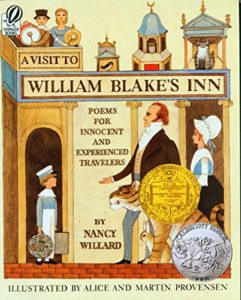 Betsy: I forgot about A Visit to William Blake’s Inn! Of course! 10 years ago, Good Masters, Sweet Ladies —another poetry book— by Laura Schlitz got some Newbery love. It is delightful.

The poetry books we’re discussing today are wildly different. Just about the only thing linking them is that they are poetry. But they are different styles, have different target audiences, “feel” different, …

I’m Just No Good at Rhyming: Does It Have What it Takes?

Let’s start with I’m Just No Good At Rhyming, a book that made all three of us chortle (and the various children who got their hands on it!). 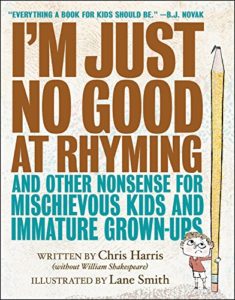 Megan: My boys love the quirky humor in IJNGAR. I’m fascinated by the complexity of it. This is Chris Harris’s first book for kids (specifically his own), and while many of the poems are so clever and a few use words like “stupid,” there are some wonderful parent-child interactions. Clearly there are some good relationships here. Did you notice any other surprising elements that make this different from Shel Silverstein or Jack Prelutsky?

Janie: What surprised me about IJNGR (anybody want to try pronouncing that?) is that it’s not just a humor book.  Most of the poems are funny and some are hilarious, and some are not actually poems, like the “Alphabet Book (by the Laziest Artist in the World).”  And you don’t want to miss the acknowledgements and the author/illustrators bios, either!  But some of the poems are a bit edgy, like the kid/parent faceoffs.  And some are sweet, like “The World’s Best Offer.”  And some are profound, like The Valleys Shape the Mountains,” and some are even a bit philosophical (“The Whydoo” sets out a kind of Kantian morality, which I’ll explain if asked).  Some you’ll like and some you won’t.  Some you’ll skip over and go back to later.  This guy Chris Harris isn’t just a rhymer—which, after all, he’s no good at—he’s a poet.

Betsy: I think Harris is a better poet than Silverstein or Prelutsky. All three poets’ work appeals to kids because all three get kids: that quirky, silly, self-deprecatory sense of humor that is especially popular with boys. But Harris’s work has an extra layer of sophistication. In addition to the breadth of moods Janie alludes to, what struck me was his sheer ability to play with language and the poetic form. The title poem is a perfect illustration of this: the reader naturally wants to end each line with a word that rhymes because that word makes sense in the context, but Harris manages to insert a word that fits the meaning just as well, but which most certainly does. not. rhyme. The back of the book contains poems that didn’t make it into the book; one of my favorites is “The Title’s Exclamation Point Got Bent Out of Shape?”

We could spend the rest of the day enumerating the delights of this book (including Lane Smith’s illustrations), but let’s move on to One Last Word by Nikki Grimes.

One Last Word: Is It “Distinctive”?

Grimes released a picture book this fall based on Psalm 121, titled The Watcher. Both books use the Golden Shovel poetry technique, a fascinating and complex form of poetry that is easier to see than to explain. (See our review of One Last Word for an example). Janie, why don’t you start us off—tell us about One Last Word. 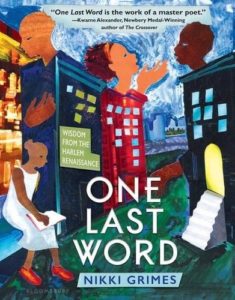 Janie: Nikki Grimes’ picture book The Watcher was World Magazine’s PB of the Year this year! She’s a out-and-proud Christian, and you get a sense of that in One Last Word (though it’s not as obvious as in The Watcher.  She uses a poetry form called “the Golden Shovel” to springboard from poems of the Harlem Renaissance to poems reflective of African-American experience today.  What I especially like about One Last Word is the balance between transcendent faith and real life here and now.  Those often seem in conflict.  The people behind her voices know the dark side, and sometimes have contributed to it, but they are fighting to rise.  This means taking stock of and valuing themselves.  One poem borders on the sensual and may make parents uncomfortable (and may go over some readers’ heads), but it’s part of the package.  For the most part, these voices are not complaining about their lot as a downtrodden race: they’re acknowledging their past and moving toward a new day.

Megan: I read a picture book that began with a broad scope of encouragement for one’s child, but at the end it emphasized “Black lives matter.” I agree, black lives do matter, but I felt excluded by that slogan more than I did by the race of the parent and child pictured in the illustrations. I felt like it promoted division, rather than promoting diversity in a positive way. On the other hand, I could relate to One Last Word even though I was unfamiliar with many of the Harlem Renaissance poets because the words were beautiful and I was invited to see harmony in humanity.

Betsy: I love that “harmony in humanity” phrase, Megan! That’s one of the things that struck me in One Last Word. I was stunned by Grimes’s ability to use the Golden Shovel technique so well: she really did extend the Harlem Renaissance poems into the 21st century, keeping their original sense even as she added new material and new styles. This book says “distinguished” to me in every area: illustrations, poetry, theme.

Which One–if Either–Do We Think Has a Real Shot?

And now for our predictions. Do any of these books have what it takes? Will we see some shiny stickers gracing their covers in a couple of weeks? [Note for readers: if you like any of these books we’re discussing enough to buy them, best do it quickly. As soon as awards are announced, booksellers pull books so they put the shiny stickers on them. If you have an award winner that does not have a sticker on them, you can show off your excellent taste in having vetted and approved a book even before the “official” stamp of approval!]

Janie: I’m Just No Good at Rhyming doesn’t fit in any ALA Award category, which is too bad.  They should have one for humor, because so many award winners are dead serious!  So I’m going to say its chances for the big prize are slim to none.  One Last Word will win something, and I suspect more than one award.  It has a very good chance for the Newbery list.

Betsy: I’m absolutely positive One Last Word will win something (honor or medal). It’s already earned a Boston Globe-Hornbook Honor Award; the sheer amount of African American talent on display (different African American illustrators participated in the book along with Grimes) coupled with the theme of the book and its Harlem Renaissance inspiration makes it seem likely that a Coretta Scott King award of some sort will be forthcoming as well. It could even win the CSK for both author and illustrator. It would be hard to give this book a CSK award for illustration, though, since so many illustrators are represented! I’m not sure how that works. But I do hope it earns some Newbery love. It is “distinctive” in every way (a word that the Newbery committee takes very seriously), it has enough political edge with enough “oomph” thematically to attract Newbery attention, and it is just plain well done. The CSK winners have these same characteristics, but the Newbery still has more recognition, and I think this book deserves it! Perhaps The Watcher will earn some love, too! It, too, is timely and fits many of the Caldecott and CSK requirements.

Megan: While I have my serious doubts, maybe one of the committee members has a son who could hardly read through the book without laughing out loud. If they’re looking for something distinguished, which usually means serious and sophisticated, the committee will probably find reasons to deny IJNGAR a mention. However, even if Newbery winners become required classroom reading, they are rarely playground diversions that get passed around the intended audience. Reading should be fun. Enjoying poetry needs to be learned. If IJNGAR misses Newbery distinction but inspires a future poet, that is a worthy honor indeed.

Have you read either of these books? What do YOU think? Are there other 2017 poetry books that you think have a shot at the awards this year?

Let us know in the comments!