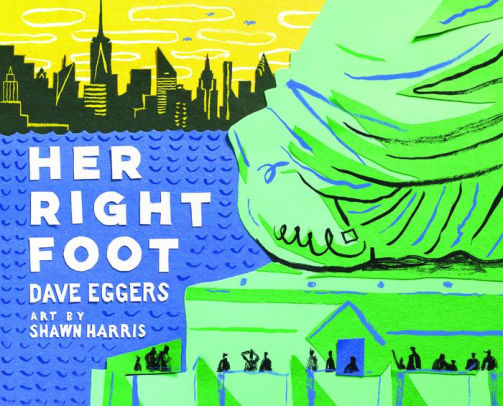 Her Right foot introduces pre-readers and early readers to the Statue of Liberty and what she stands for.  Ages 4-8 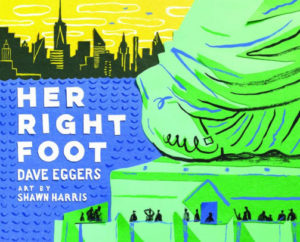 Let’s pretend we know nothing of the Statue of Liberty and only a little more of France.  So we start there, in France, where two Frenchmen have an idea.  One of them happens to be a sculptor.  We’ll learn about their vision of creating a huge statue to celebrate the 100th birthday of the United State.  The statue is assembled in France and then taken apart—

But we just put it together!” the workers said. “That is absurd!” They said all this in French, the language of the French, a people who appreciate the absurd.

—for reassembly in New York City.  We’ll learn a lot more about the statue before we get to her foot, but eventually we will, with apologies from the author for taking so long.  Here’s the thing: her right heel is off the ground, indicating that Lady Liberty is on the move. She weighs 450,000 pounds and wears a size 879 shoe and she is moving.  Where to?  Not to the nearest café for a latte.  We notice where she facing: out to sea.  That’s where people come—immigrants from all over the world, seeking a new home in a new land.  Does that give us a clue?

In welcoming the poor, the tired, the struggling to breathe free, she is not content to wait.  She must meet them in the sea. 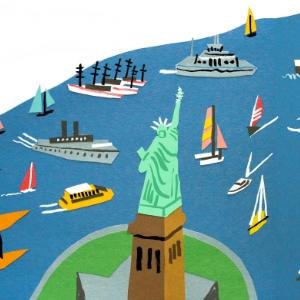 That’s a beautiful interpretation, and the last picture leaves us with the beautiful impression of a welcoming nation providing a home for all the tempest-tossed.  It’s also a beautiful piece of string-pulling for those who are wondering if it’s time to reform our immigration policy.  The text, as indicated by these examples, is warm and conversational and the illustrations include some clever sight gags in their seeming simplicity—such as Bartholdi, the sculptor, holding aloft a banana while he clutches a menu in imitation of Liberty’s pose.  It’s a great way to introduce an American icon, so long as we can retain a clear idea of America.

Cautions: None, except for a subtle political slant