Podkin One Ear is the first volume in an exciting fantasy series that celebrates individual courage and determination. Ages 8-12 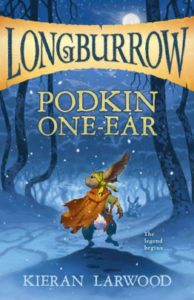 All the rabbits of Thornwood Warren, are getting ready for the midwinter celebration of Bramblemas.  The feast is ready and the gifts are wrapped—all that remains is the arrival of the Bard, the cranky old storyteller.  When he arrives, the little rabbits clamor for tales about the days of the Gorm, their fearful leader Scramashank, and of the hero who arose to defeat them.

The Gorm were vicious ironclad rabbits who seemed to come from nowhere, intent on destroying everything in their path. On the night they invaded Munbury Warren, they killed brave chief Lopkin and untold warriors.  But Lopkin’s children were able to escape: Podkin, his sister Paz, and their baby brother Pook.  Although the odds didn’t favor three juvenile rabbits on the run in midwinter, a magical dagger called Stawclaw improved their chances a bit.  But of even more worth were native wit and hitherto-unsuspected reserves of courage.

This new fantasy series bears some similarity to The Green Ember by S. D. Smith, but it’s slightly edgier and (in my opinion, at least) better written.  Also not explicitly Christian.  The rabbits worship, and frequently refer to, an unnamed goddess whose horned helmet is imitated by the Gorm—implying that they’ve become a law unto themselves.  Podkin challenges them on that score in their final confrontation: What about the Goddess? Who says that being Gorm is the right way?  Why should you get to take us all over just because you’ve got that stupid iron armor?”  (Or, Where there’s no transcendent law, does might make right?)  Podkin’s character arc is transformative: from a lazy, entitled princeling with a bossy older sister, he grows into his role as a leader of men—er, rabbits.  Character development plus plenty of excitement in relatively few pages makes this a satisfying adventure, though sensitive readers be advised: the Gorm are really terrifying, especially as pictured in the double-page illustrations.  Parents be advised that one ally the heroes encounter on their journey is an aged herbalist who calls herself a “witch.”  Not the spell-casting kind, though.