Sputnik’s Guide to Life on Earth by Frank Cottrell Boyce

In this far-out fantasy, an alien named Sputnik has to prove earth is worth saving. 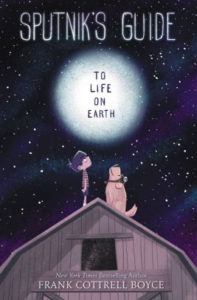 Once his eccentric grandfather goes around the bend, Prez (Preston) Mellows enters the foster care system (or Temporary, as it’s called in the U.K.).  His temporary family is nice, but he could use a friend.  He gets one, but Sputnik is not easily explained:

“He’s an alien.  He can talk and he’s good at fixing stuff.  But he’s fairly unpredictable and heavily armed.  Plus, maybe he’d like to play with you, but he really should be concentrating on saving the world.”

Nor can he be introduced as he is, since everybody except Prez sees him as a dog.  Sputnik is unpredictable, often dangerous, and usually clueless about unacceptable behavior.  But he can also manipulate matter and sub-atomic phenomena–merely by, as he constantly explains, reading the instructions.  It’s all (or mostly) in service of his mission, namely saving the world.  An interplanetary commission, dedicated to clearing the universe of unnecessary planets, has placed Earth in the extinction column unless Sputnik can compose a list of reasons for keeping it.  Prez thinks that natural and architectural wonders should be on the list but Sputnik’s opinions are less conventional.  How about fried eggs, yellow safety jackets, and Granddad’s harmonica?

All of Boyce’s books are quirky, and this is one of the quirkiest.  But there’s also a sweetness, exuberance, and lack of cynicism that makes them appealing.  An odd streak of religiosity sets this one apart, with language that could be spiritualized science or scientific spiritualism:

Sounds good to me.