*For Christ’s Crown: Sketches of Puritans and Covenanters 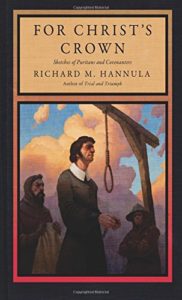 Just as the title implies, this volume is all about Christians in England and the Americas during the 16th and 17th century. The Puritans were those who came to the New World in search of freedom of religion; the Covenanters were the Scottish Presbyterians who stood up to government imposed worship practices. Both groups believed firmly in the centrality of the Word of God and in biblical worship.

Each of the men (and two women) to whom the reader is introduced is described in story form, plunging the reader into the action at the beginning of the chapter. A brief introduction reminds readers who was important politically during this highly charged chapter of history. This volume is a nice addition to the other Hannula church history books; there is little overlap in coverage. It will hold special interest to those in Reformed church traditions, and is better for a slightly older audience than Trial and Triumph and Radiant, partly due to its narrower focus. I’d recommend families read the other two first if they are looking for a broader church history overview, but I highly recommend this volume, too! It is hard to find accessible material on the Covenanters, in particular. Ages: 10 and up.

*Heralds of the Reformation: Thirty Biographies of Sheer Grace 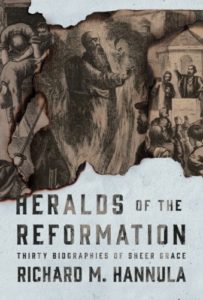 Divided according to geographical regions, Heralds of the Reformation introduces readers to thirty Reformation heroes, most of them men. Part One covers the forerunners of the Reformation, such as Jan Huss. Part Two begins appropriately in Germany with Luther, Melancthon, and others. Hannula includes those, like William of Orange, that we might not think of right away as “Reformation” heroes; he also includes names that will be less familiar to many readers: Fanino Fanini, Gaspard de Coligny, and others.

This volume is more academic than Trial and Triumph, Radiant, and For Christ’s Crown. Each short biography chapter is narrative like his others, but there are more features in the book as a whole. Each section includes a “Reformation Basics” section that discusses one of the five solas or another Reformation particular such as the sacraments. Each section ends with comprehension and discussion questions. The book also begins with an overview and timeline. Individuals could certainly read this and glean much, but it would be perfect for a high school Sunday school class, a high school Bible curriculum addition, or even an adult Sunday school class or small group. The combination of narrative biographies with the more academic information makes this an engaging look at a key time period in church history. Recommended for ages 10 and up.

Cautions: Violence (many of these people were martyred!)

These books were provided free upon request in return for a fair and balanced review. Thanks to Canon Press!