Henry and the Chalk Dragon by Jennifer Trafton

Henry is too shy to share his artistic talent, until one of his creations comes to life and threatens to wreck the whole school. 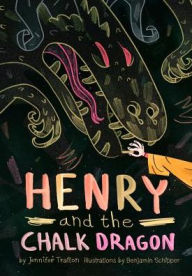 Henry’s in trouble at school—not for misbehavior but for nonconformity.  In honor of National Vegetable Week, all his classmates are collaborating on a project that requires them to draw bunnies.  Henry would rather draw anything else.  In fact he does draw everything else, in his sketchbook and on his bedroom door, which functions as a blackboard.  So far, his creations are all for his eyes alone—until the day his latest, a jungle-green dragon, peels off the door and makes its way to school.  There, the chalk dragon has a field day wreaking havoc while morphing into every creature that lurks in Henry’s private sketchbook.  In order to thwart the dragon, Henry must grow into the tinfoil armor and milk jug helmet he likes to wear when dressing up as a knight. How does one become a knight for real?  Not alone, for one thing, and Henry gets unexpected help from his new friend Jade (the poet) and his old friend Oscar (the scientist), who have their own gifts to contribute.

Imagination runs wild in this story, and that’s the point.  Creativity is not complete until it’s shared, and no telling what will happen then.  Be creative with your gifts, and be bold!  The theme may come down a bit heavy-handed at times, with Mr. Bruce the bus driver as its most articulate spokesman.  The action may also be too outlandish for the necessary belief suspension, but even readers who can’t fully enter this world will enjoy the witty wordplay and flights of fantasy.  They may even start letting their imagination loose a little bit, which would be great—as long as they can catch the dragons they unleash.