Peter Nimble and His Fantastic Eyes by Jonathan Auxier

A blind boy and an enchanted knight set off on an epic quest in this middle grades fantasy adventure. 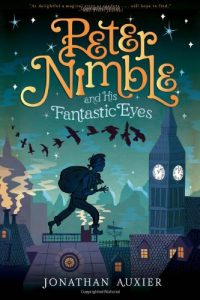 We meet Peter Nimble as a thief working on behalf of his harsh master. No one knows his parentage, and the theory is that ravens pecked out his eyes as a baby. Through a strange turn of events, jumpstarted by Peter’s theft of a box of magic pairs of eyes, Peter finds himself on a magical quest along with Sir Tode–a knight turned into part cat/part horse. Peter and Sir Tode have quite the series of adventures on their quest towards Peter’s destiny; sometimes they even use the Fantastic Eyes (one pair allows them to transport immediately back to the previous place the eyes saw, for example). The final pair of Fantastic Eyes is reserved until the end of the book; suffice it to say that they are a perfect fit for Peter’s new role in the kingdom of HazelPort.

Auxier must have grown up reading the greats–there is much in this book that reminds me of wonderfully told tales, great authors, and wildly inventive persons/places/things. It calls to mind Pinocchio (dogfish anyone? the notion of a “real boy” finally at the end), great battles in which the underdogs miraculously triumph (Helms Deep comes to mind), Peter Pan (not the least of which reminders include a prominent fishhook in action and the title character’s name), Oliver Twist (poor chap taken in by master thief), anthropomorphic animals with noble or ignoble hearts (too many to name here, but the feel of Narnia comes to mind),…. There’s another striking Narnia reference at the end, but I don’t want to spoil anyone’s fun. All in all, this is just what a great children’s fantasy novel should be–or, a very, very good start.

Note for concerned parents: there is some striking violence in this book. In some ways, it’s reassuring to know that bad guys (who are really, really bad and have just crunched someone up to eat him/her) also get their fair shrift; that war is bloody, but healing tears can sometimes wash that blood away; and that when right triumphs in the end, it is often at a cost. The tone regarding violence is very matter of fact, and there is not a lot of graphic description. It’s just what you’d expect if a horde of angry apes is fighting to the death against a horde of loyal, magnificent ravens in a kingdom that had vanished but has now resurfaced….