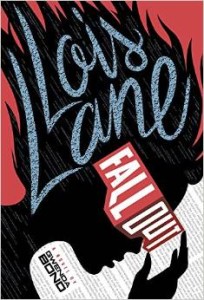 Bottom Line: Fallout introduces Lois Lane as a hard-charging teenage reporter with a passion for justice, in this fun, clean YA adventure.

Lois, 16, daughter of the famous General Sam Lane, arrives at East Metropolis High with a reputation for upsetting the status quo. She’s not exactly a trouble-maker; more of a whistle-blower, right-setter, and justice-seeker who doesn’t know the meaning of the word “fear.” Or possibly even “tact.” On her very first morning at school, Lois runs afoul of Principle Butler when she takes the side of a girl she doesn’t even know. The girl, Avani, complains that a group of black-clad gamers who call themselves the Warheads are trying to control her brain. Even though the principal laughs off Avani’s claim, Lois has a hunch there’s something to it, and her aggressiveness attracts the attention of a visitor at school. The visitor introduces himself as Perry White, editor of the Daily Planet, and invites Lois to join his team of high-school editors for a new online publication, the Daily Scoop. He recognizes in her a “killer instinct. The nose for news. The thing that makes you ask questions and not stop until someone answers them.” Within days Lois and her three fellow reporters launch an investigation into a bullying scandal that leads right through the principal’s office and into the highest reaches of Big Business and the U. S. Military.

Most readers will by now have recognized Lois Lane and Perry White, and within a few chapters they will guess the identity of Lois’s online best buddy, SmallvilleGuy, who becomes an essential ally in her investigation even though they never meet. Comic-book spinoffs promise fun and adventure, and Fallout delivers without a lot of teenage angst and drama. The plot may rely a bit too much on Lois being in the right place at precisely the right time, as well as having unapproved access to her father’s secret stash of cutting-edge surveillance devices. But there’s enough suspense and witty repartee to keep the story moving at a fast clip. Even though Lois tests parental authority, the thing that drives her is not rebellion but a burning desire to make things right. She’s others-centered rather than self-centered, releasing the reader from the almost claustrophobic feel of some YA novels. Though she’s mildly attracted to one boy on her team, and nurses a secret crush on SmallvilleGuy, romance takes a decided back seat. In the end, Perry pays tribute to Lois’s real zeal, which also happens to be his: “anybody can scratch up news. I meant [a passion] for the truth.”